What side are you on...the side of freedom or fascism?

Today, we have another example of how some who took an oath to uphold the US Constitution think they are above the constraints it places on their power. They're liberal Democrats, headed by Vice President Joe Biden, who signaled today that Richard Milhous Obama is preparing to become Il Douche and take dictatorial powers so they can "protect" Americans from themselves (The Weekly Standard).

"The president is going to act," said Biden, giving some comments to the press before a meeting with victims of gun violence. "There are executives orders, there's executive action that can be taken. We haven't decided what that is yet. But we're compiling it all with the help of the attorney general and the rest of the cabinet members as well as legislative action that we believe is required."

Biden said that this is a moral issue and that "it's critically important that we act."

Biden talked also about taking responsible action. "As the president said, if you're actions result in only saving one life, they're worth taking. But I'm convinced we can affect the well-being of millions of Americans and take thousands of people out of harm's way if we act responsibly."

A moral issue? Who died and made you God, asshole?

If you were not frightened by hearing the vice president say that the leader of the United States was going to usurp Congress and take away part of our Constitution unilaterally, then you are not an American.  You're probably a bed wetting liberal who was more offended by what Matt Drudge posted about it at this website. 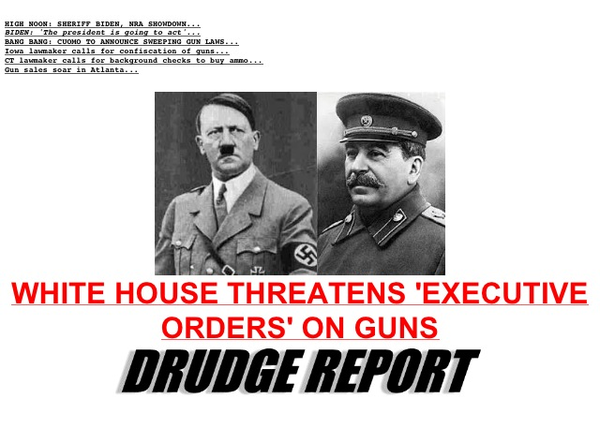 Well, the truth hurts doesn't it? Because the first thing the Communists and Nazis did was seize guns from the people they thought shouldn't have them.  Like this Soviet poster from circa 1920 shows: "Citizens! Hand Over Your Weapons" 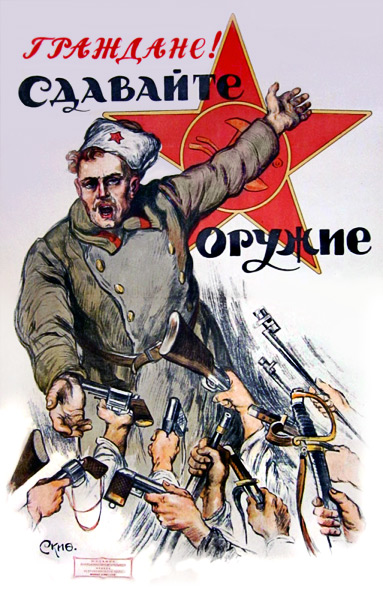 Then it was easier for Josef Stalin to kill the peasant farmers and take others away to the gulags.

Or when the Nazis used gun registration (where have we heard that before) to seize guns, starting with the Jews in 1938. 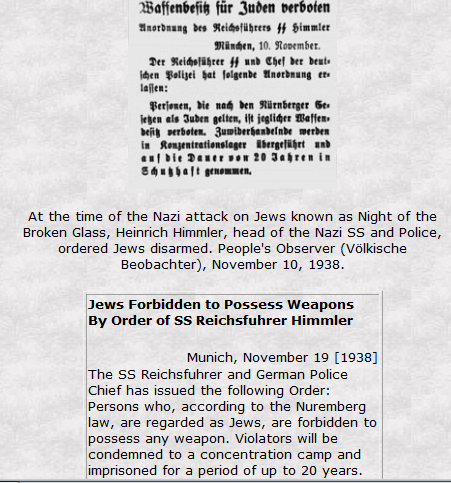 ﻿
Why? Because a dictator won't face armed resistance when he's trying to impose his will on "the masses."  Don't listen to the media and liberals talk about guns and hunting. The Second Amendment was established to ensure the defense against a tyrant in America, should one arise.

Now, in true Rahm Emmanuel fashion (never let a crisis go to waste), another tragedy is being used to punish those who obey the law, and an excuse to take away the most precious right to a free society--self defense.

But that's what liberals do...play on your emotions. Liberalism always deals in emotion, never logic.  Remember what Eric Holder said back in 1995 when mentioned  "really brainwash people into thinking about guns in a vastly different way."?

It's no surprise he's announced he's sticking around for a second term, this radical, racist, anti-American thug who tried to commit an armed insurrection when he was a college student.

Today is the tipping point, ladies and gentlemen.  Are you going to stand for freedom, or are you going to do nothing as the Obama Regime takes Amerika the furthest down the road to Nazi Germany we've ever been?

And where are those elected leaders who are supposed to stand for us?  We need to hear from Congressional leaders, what will you do to prevent Obama from acting like a third-world dictator?

If Obama goes down this road, there should be an immediate filing of Acts of Impeachment against him and VP Biden. Any Democrat or any other lawmaker who objects to impeachment and removal from office, and wants to scream about sour grapes because of the election needs to be reminded of the following fact:


You swore an oath to preserve and protect the Constitution, not a Political Party or a President.

Preserving the Second Amendment should be a non-negotiable proposition.  Those who are calling for it's limits are enemies of freedom.

Posted by MaroonedinMarin at 6:50 PM