After yesterday's thuggery by unions, egged on by Democrats and corrupt union leaders, is it any wonder the Obama Lapdog Media is not only ignoring the story, lefty bloggers are claiming it was a "false flag operation?"

Because maybe they might have to report on what happened to Clint Tarver, whom I understand is an iconic figure in Lansing, MI.

Well, not only was his hot dog stand, the business he built--Barack Obama--destroyed by the same union thugs who destroyed the Americans for Prosperity tent (and punched conservative comedian/blogger Steven Crowder), Tarver was also called a "nigger" and "Uncle Tom" by the violent goons (Ironic Surrealism). 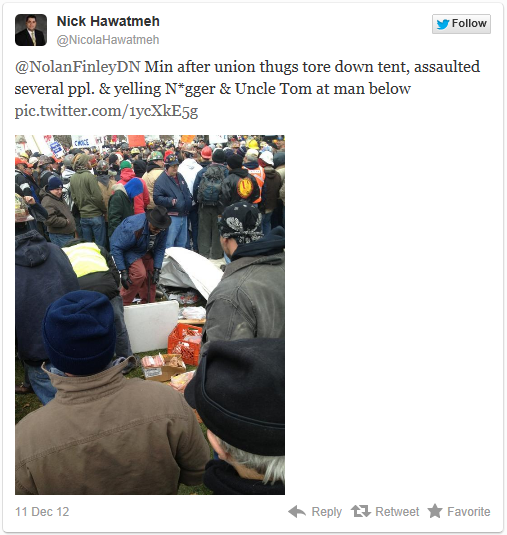 The woman (Lorilea Susanne) who set up the fundraising page for Clint has spoken to his wife. Apparently Clint was hired to provide catering for the Americans For Prosperity tent which was also destroyed by union thugs.

*UPDATE* 11:40am – I have spoken with Linda Lee, Clint’s wife. She says he is absolutely overwhelmed with our support, even more so than by the events of yesterday. I would like to clarify the events, however. Clint hired as a caterer for the AFP tent which was torn down. He was much more concerned about the others, and particularly helped to get the women out of the tent. It was when he returned to gather his equipment that the taunts and racial slurs began. He says the working people did not respect the working man. He was not there to be political; he was just there to serve. This is the Clint we know and love. Please, let’s respect him and leave our political opinions out of this. This is about our support for Clint.

Tarver was on Dana Loesch's radio show today and discussed this horrible attack on him.

Annie Patnaude of AFP also talks about the attack on their tent and Tarver's hot dog stand.


As mentioned above, there is a website set up for people to donate to Mr. Tarver to help him rebuild his business. Robert Stacy McCain notes over at The Other McCain that "Those racist right-wing teabaggers" have already donated $17,000 to him.

Of course, there's an irony in what McCain wrote, which is why he wrote it, and pardon my language coming. Remember all the bullshit that the Tea Party has had to put up with from these same liberals who are silent now?  All the allegations of violence, racism, and especially the infamous March 20, 2010 phantom "n-word" and spitting alleged against the Tea Party by the racists in the Congressional Black Caucus? Those (to quote the late Andrew Breitbart) "bullshit artists" and "hateful bastards" in the lapdog media had the CBC's Big Lie circulating halfway around the world before the truth could catch up with it.  But what happened to Mr. Tarver. or Kenneth Gladney (remember him? Attacked in 2009 by the S-SEIU and called a racial slur) is ignored because their damn political agenda is more important than the truth.

Speaking of which, where are the Phony Reverends Jesse HiJackson and Al Charlatan with his bullhorn screaming "No Justice No Peace." Where's the civil wrongs group the NAACCP (National Association for the Advancement of Certain Colored People), or are they going to ignore Mr. Tarver like they did Mr. Gladney?

Not only that, but President Obama's silence speaks volumes.  Who in the media will dare confront him and that little punk Jay Carney?

While the thousands donated to Mr. Tarver is great, I personally think that thuggish, fat bastard Jimmy Hoffa Jr., who was engaging in uncivil rhetoric again (remember what he said about the Tea Party?) should pay for Tarver's damages. Forget just a hot dog stand, Hoffa owes Tarver an apology for damages in the form of not just a new mobile hot dog stand, but a storefront location as well.