Police are looking for vandals who defaced the Iwo Jima Monument just outside the main gate of Marine Corps Base Quantico, Va., last week.

Officials at Quantico had to remove a 4-inch line of bright pink paint that vandals sprayed halfway around the base of the iconic statue last Tuesday around midnight, according to a Marine Corps spokesman. Military police immediately alerted Prince William County police and canvassed the area, but they were unable to find the culprits.

Base officials consulted with monument specialists in Washington to find the best way to remove the paint from the statue, which depicts the historic flag-raising on Mount Suribachi during the famous World War II Battle of Iwo Jima, without damaging the stone, according to public affairs. The paint was removed by Friday night.

The incident is still under investigation.

Here's a photo of the vandalism: 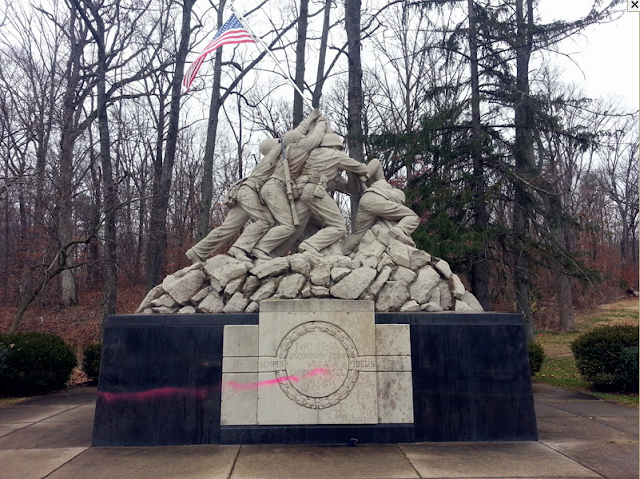 I don't know about you, but when I see someone has spray painted this iconic statue with pink spray paint, I have a suspicion of who the suspect might be, but I'll publicly refrain since it's only circumstantial.  I'm not like Charles "Chuckles the Clown" Johnson, the failed banjo picker/blogger who accused the Tea Party of killing a census taker when the guy actually killed himself.
Posted by MaroonedinMarin at 7:19 PM