Imprisoned Vet Jon Hammar To Be Released From Mexican Prison

Jon Hammar, the U.S. Marine who has been in a Mexican prison since August on a dubious weapon charge is being released today, his father confirmed to FoxNews.com.

Jon Hammar Sr. said during a flight layover in Houston that he was on his way to get his son, after he and his wife Olivia received a call Thursday night from their attorney, Eddie Varon-Levy telling them their son was going to be released.

"I haven't seen it in writing yet but Eddie has confirmed it with the court that Jon is being released today," Hammar Sr. said. "The U.S. consulate said they would pick Jon up at the prison and accompany him to the border crossing."

Hammar's family and legal team were headed to the border town of Brownsville, Texas, where they hope to have a joyful reunion sometime today. Hammar, 27, who served in Iraq and Afghanistan, has been stuck in a notorious, drug cartel-controlled prison just 15 miles south of the U.S. border since Aug. 13, after he crossed into Mexico and declared an antique shotgun to Mexican customs officials that was deemed illegal.

"The court ruled on the motion that excluded the evidence on the charge because of a violation of his constitutional rights under Mexican law which resulted in the charge being dropped," Hammar Sr. said.

The Marine's father said he is excited and scared, but won't rest until his son is on the U.S. side of the border. He said the two planned to bond on the the trip home to Palmetto Bay, Fla., which Hammar Sr. said would be made by car.

No word yet if he has been released, but KRGV Channel 5 in Weslaco, TX in the Rio Grande Valley has the following photo on their Facebook page of a couple of veterans waiting at the Brownsville/Matamoros Bridge to welcome Hammar back to the US. 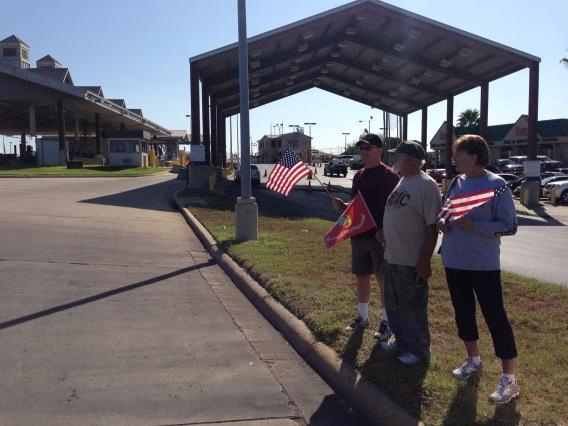 Posted by MaroonedinMarin at 5:45 PM