Eunuch RINO Senate Leadership Caves, Give Obama, Dems Some Tax Increases, No Spending Cuts Offered (Or Maybe Not, Thanks To Obama's Obnoxious Presser) 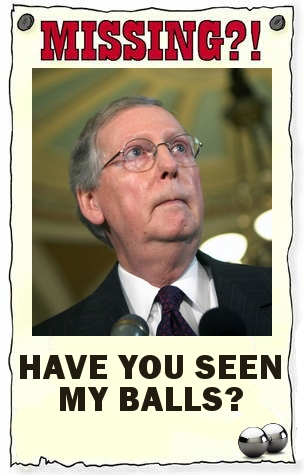 Because just like his counterpart in the House (the drunken crybaby John Boehner), McConnell showed he's got no backbone when it comes to standing up to the class-warfare, liberal demogauges like Richard Milhous Obama, "Dingy" Harry Reid and Stingy Hoyer.

After saying they wouldn't, the GOP establishment is now willing to raise taxes on top-earning Americans (Robert Costa, NRO).

Senior Senate Republican aides tell NRO that the tax side of the fiscal-cliff deal has been finalized. Here’s a sketch of the framework:

— The Alternative Minimum Tax would be permanently patched

— Estates over $5 million would be taxed at 40 percent, and that tax rate would be permanently extended.

However, all spending bills must originate in the House, and the House wouldn't even go along with Boehner's cave in of raising taxes on incomes of $1 million or more.

This "compromise" is all without any spending cuts, meaning Obama still will gut our defense spending (Human Events).


President Barack Obama told the press Monday afternoon that congressional leaders were approaching a deal to halt an automatic tax increase with the expiration of the Bush tax cuts on New Year’s Day.

But, he said, there was nothing yet in place to stop a slate of automatic, aggressive cuts to defense spending and other key programs–and wouldn’t be, unless Republicans agreed to yet more revenue increases.

In a rare public acknowledgement of sequestration–a plan that reportedly originated in the White House last year as an ultimatum to motivate Congress toward a deficit deal–Obama said the $1 trillion package of defense and domestic spending reductions “may not always be the smartest cuts.”

“We’re using an axe instead of a scalpel,” Obama said.

...And Obama doubled down again on his refusal to countenance any alternative to sequestration that didn’t raise more revenue.

“Any agreement to deal with these automatic spending cuts, those also have to be balanced,” he said. “Revenues have to be part of the equation in turning off the sequester.”

That means 800,000 furlough notices will be sent out by the Pentagon to civilian employees. Never mind that, as Twitchy noted, Obama said during the October 22 Presidential Debate that the sequester would not happen.

Bob, I just need to comment on this. First of all, the sequester is not something that I proposed. It’s something that Congress has proposed. It will not happen. The budget that we’re talking about is not reducing our military spending. It’s maintaining it.


Meanwhile, at a time when we should cut spending, Dear Leader Obama has, by executive fiat, given that village idiot Joe Bite Me and all of Congress a pay raise.  All at a time when Americans who still have a job are taking home less money.

So, thanks a lot RINOs, the Republican party has shown they stand for nothing, and have no core values that they will not compromise.

UPDATE: Or maybe no deal will happen, after Obama acted like a dick at his press conference today, with human props standing behind him (Legal Insurrection).


Obama just had what was possibly the most insulting press event I’ve ever seen from a President — I’ll post the video when available, it will infuriate you.

He spiked the football, overtly insulted Republicans and Congress, and laughed that he is on the verge of getting what he wants. Either he wants to nix any deal, or he’s actually just enjoying his victory but is emotionally incapable of being presidential about it.

Everything you ever wanted to know about our disfunctional government was on display.

Posted by MaroonedinMarin at 11:44 AM