The week is almost over and two liberal Democrat leaders have shown just what obnoxious asses they really are.

First one is "Dingy" Harry Reid, who accused the GOP of running the House of Representatives "like a dictatorship."

Reid said the House is "being operated with a dictatorship of the speaker" and suggested today that the Republicans should agree to accept the original Senate bill pass in July. Reid's comments, however, made it clear he did not expect that to happen.

"It looks like" the nation will go over the fiscal cliff in just five days, he declared.

"It's not too late for the speaker to take up the Senate-passed bill, but that time is even winding down," Reid said. "So I say to the speaker, take the escape hatch that we've left you. Put the economic fate of the nation ahead of your own fate as Speaker of the House."

Boehner's spokesman Michael Steel reacted to Reid's tirade in an email, writing, "Senator Reid should talk less and legislate more. The House has already passed legislation to avoid the entire fiscal cliff. Senate Democrats have not."

Boehner has said it is now up to the Senate to come up with a deal.

First, John Boehner's spokesmouth needs to get some fire in him and attack at Dingy Harry for the "dictatorship" uncivil comment. If Dingy Harry wants to look for a dictator, he needs to head to his nearest mirror or look at the guy in the White House for the two best examples. Seriously. Reid has not been willing to even let the Senate vote on Boehner's cave-in of a tax on millionaires, had that proposal passed.

So who wants the country to go over the fiscal cliff, and all of our taxes to go up?  This guy right here. 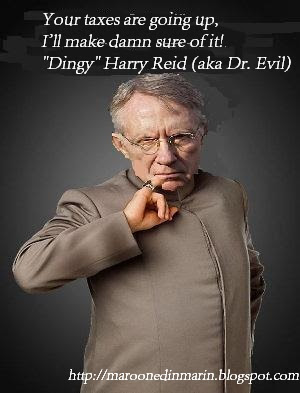 Harry Reid’s Democrat-led Senate has refused to do their most basic (and most important) job, propose and pass a budget, in almost 4 years. They have not even attempted to do so. Nor have they cast even a single vote in favor of the budget submitted by their party’s President (how bad have Obama’s budgets been that not even a single Democrat has voted for any of them?)

We are going over the fiscal cliff in a few days. The Democrats and their compliant media minions will try to make you believe that this is somehow the GOP’s fault. But that simply is not true; you know it as well as I do, regardless of which side of the aisle you sit.

Had Harry Reid not broken the law (each year they did not propose and pass a budget), we would not be where we are today, peering over this so-called fiscal cliff.

Next liberal jerk is the guy from Maryland, Steny Hoyer, I call him "Stingy" Hoyer. Here's another example of how liberals like to use uncivil rhetoric as a way of bullying and attacking anyone who blocks their socialism (Twitchy).


If there’s ever a time when using the shooting of children as a metaphor is a good idea, December 2012 certainly isn’t that time. That’s what House Minority Whip Steny Hoyer did today though, telling reporters on Capitol Hill that the GOP’s fiscal cliff negotiations were “somewhat like taking your child hostage and saying to somebody else, ‘I’m going to shoot my child if you don’t do what I want done.’”

Keep in mind, Stingy Hoyer called opponents of Obama in 2009 "unAmerican" but in 2011 wanted the rest of us to "tone down the rhetoric."


"I talked to Mark Kelly, [Giffords'] husband, who is an astronaut. [He is] very angry, very angry about the level of angry rhetoric that he believes incites people - not only that Loughner targeted [Giffords] in particular, but to target those in authority, whether they be judges, members of Congress, local officials," Hoyer said.

He added that many lawmakers and their staffers are concerned.

"My colleagues are very concerned about the environment in which they are now operating. It's been a much angrier, confrontational environment over the last two or three years than we have experienced in the past. I think there is worry about that," Hoyer said.

Speak for yourself, Jerkoff!

Enjoy your shared honor, Harry and Stingy. Assholes!
Posted by MaroonedinMarin at 6:45 PM