Well, there they go again. Now that the election is over, no need in acting thrifty, the Obamas, and especially Moochelle, need to vacation like the one percenters. 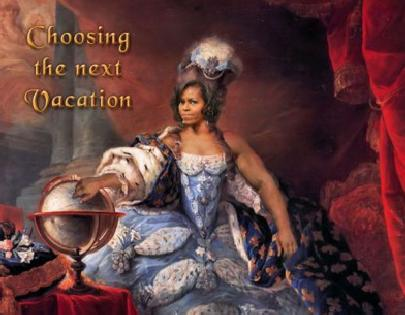 All on the taxpayer dime, of course (Hawaii Reporter, via FreeRepublic).


Residents living near the beachfront homes where President Barack Obama and First Family vacation with their friends every year since 2008 were alerted on Monday to some specifics of the Obamas' holiday vacation plans.

The report delivered to residents living along the ocean and canal that surrounds the multi-million dollar homes at Kailuana Place where the President stays, informed them of restrictions that will be implemented for 20 days beginning December 17 and running through January 6.

In a matter of weeks, Kailua residents will see the familiar street barricades fronted by U.S. Secret Service agents and Navy Seals and the U.S. Coast Guard stationed in canal and ocean waters.

The President, who spent some of his childhood years in Hawaii, brings his wife, two daughters, Sasha and Malia, with dog Bo in tow, each holiday season. They settle into the small town community known for its spectacular sparkling beaches, warm turquoise ocean, rolling surf, country shops and restaurants and friendly people.

The homes where they stay are just a two-minute drive from Kaneohe Bay and the Marine Corps Base Hawaii, where the Obamas and friends can access private white sand beaches and military workout facilities.

While many residents welcome the First Family, others are disheartened by the restrictions put on air, water and road travel while the President and family are in town, especially because it is the holiday season and many families on vacation want to use their boats or surf and paddle in the welcoming ocean waves fronting the Kailua homes. In addition, the President's caravan of at least 22 vehicles including an ambulance can easily overwhelm the community that typically has single lane streets.

The biggest cost is travel, according to the Reporter:

The cost for USAF C-17 cargo aircraft that transports the Presidential limos, helicopters and other support equipment to Hawaii has never been disclosed in the years the President has traveled to Hawaii. However, the flight time between Andrews Air Force Base and Hawaii is at about 21.5 hours roundtrip, with estimated operating cost of $12,000 per hour. (Source: GAO report, updated by C-17 crew member). The United States Marine Corps provides a presidential helicopter, along with pilots and support crews for the test flights, which travel on another C-17 flight. That is $258,000, not including costs for the 4 to 6 member crew's per diem and hotel.

The rentals are fronted by the ocean and backed by a canal. So, the taxpayers must cover the costs for housing U.S. Secret Service, U.S. Coast Guard and Navy Seals in beach front and canal front homes around where the President stays.

Last year, that added up to about $200 per bedroom per day, or $21,600 per average home for a nearly three week period, with special forces renting at least 7 homes. Security arrives ahead of the President costing taxpayers about $176,400 for the length of the visit.

The President’s staff and White House Press Corps typically stay at one of Hawaii’s oldest and most elegant hotels, the Moana Surfrider. Besides its stunningly beautiful view of Waikiki, and its traditional Hawaiian architecture and decor, it is one of the most pricey hotels in the state and government rates are not available during the holiday season. Rooms start at around $270 but can cost as much as $370 a night for an ocean view before Christmas, and climb much higher around the new year.

A conservative estimate with rooms at $270 (excluding a 9.25 percent Transient Accommodation Tax and a 4.712 percent General Excise Tax on each bill, meals, internet charges and other charges) means the taxpayers are covering more than $129,600 in hotel bills for some two dozen staff.

Local police are paid over time for the President’s visit, which has historically cost Oahu taxpayers $250,000.

The city ambulance the accompanies the President 24 hours a day through his entire visit is about $10,000 to city taxpayers.

So, once again, the Obama's, who claim to represent the middle class the "99 Percent" act as if they are royalty, especially while many Americans may not afford to take even a trip to another state to visit family for Christmas.
Posted by MaroonedinMarin at 1:34 PM