Now why would a member of the "non-violent" Occupy movement allegedly have these kinds of materials in his basement? (ABC News, via FreeRepublic.com).

Large amounts of chemicals commonly used to make bombs were found in the basement of a New Jersey doctor, along with assault rifles and a stun gun, prosecutors said today.

Dr. Roberto Rivera, 60, who according to some reports was active in the Occupy Wall Street movement last year, was arrested following a Friday night raid on his Ridgewood, N.J., home. 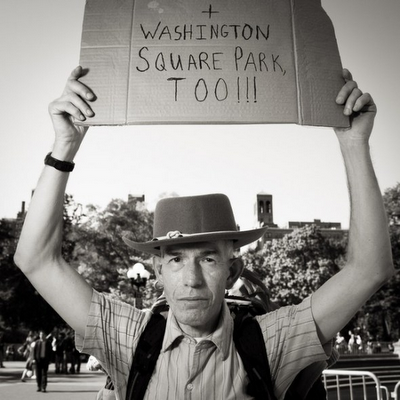 Ridgewood police first showed up at the home around 6:15 p.m. after getting a report of potential hazardous and explosive material, according to a press release from Bergen County Prosecutor John L. Molinelli.

Inside the home, police found a "large amount" of a chemical typically used in bomb-making, the release said. The name of the chemical was not released.

Armed with a search warrant, the FBI and the Bergen County Bomb Squad then visited Rivera's home where they confiscated the bomb-making chemical and also found "several other precursor chemicals commonly used in the making of explosive devices," Molinelli said.

After the chemicals were retrieved, Molinelli said police searched the home and found various weapons, including assault rifles, other firearms and a stun gun.

Rivera faces six charges, including possession of a destructive device and recklessly creating a risk of widespread injury or damage. His bail was set at $1 million cash.

It was not yet clear whether Rivera has hired a lawyer.

Bill Dobbs, a member of the Occupy Wall Street press team, said he had no knowledge of any connection between Rivera and the movement, and said Occupy is firmly committed to non-violence.

Non-violence, yeah right! If that's true, then why are members of Occupy Cleveland facing terrorism charges for a plot to blow up the Route 82 Bridge?  What about all the anti-Semitic signs, and violence at Occupy Wall Street squatting camp.  But those of us in the Tea Party! We're "extreme right wing radicals" who peacefully assemble and clean up the areas where they've held their rallies.

The Greenwich Diva says that Rivera was a "volunteer medic" at Occupy Wall Street.
Posted by MaroonedinMarin at 6:36 AM