In a discussion of the crucified Obama painting, Glenn Beck decided to come up with a little creativity of his own, using the "saviour" of Jamie Foxx and fellow liberals as his subject.


Earlier today on radio, Glenn told the audience about the artist in Boston who displayed a painting of Obama crucified on a cross like Jesus. And while many have protested the art, including people in New York City, Glenn actually agreed with the artist that the first amendment should override people’s hurt feelings over the image. That’s why he decided to create some art of his own.

“Art is in the eye of the beholder and this guy has a right to do this. I think its offensive. I don’t think its close to reality but whatever floats your boat. I support his right to do exactly that. I agree with him that people who are upset should not trump his right to be able to do it and be able to hang it wherever he wants – as long as its wanted there,” Glenn said.

And while some may find it surprising that Glenn would support the right for a person to paint a picture of Obama as Christ, he said it all goes to the Constitution – the one irrefutable piece of art which gives people the freedom.

“That document says I can’t stop him, and the spirit of that document is that I shouldn’t try,” he said.

But would people on the left agree with Glenn? In the same way that the artist pushed the buttons of conservatives and people of faith with his painting of Obama, Glenn decided to create his own piece of art with Obama. 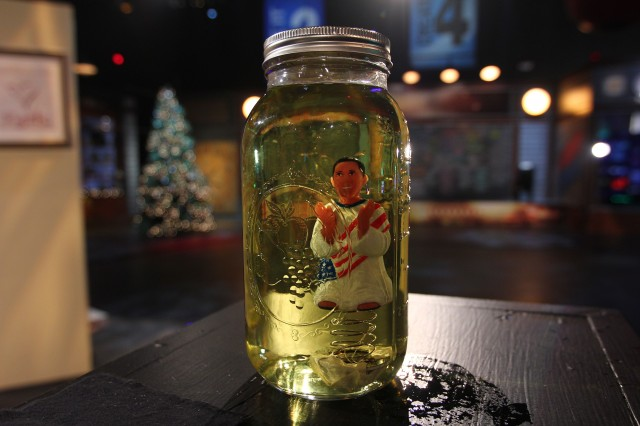 After a day drinking a lot of water, Glenn had a mason jar filled with…his own special brew of yellow liquid on set. Glenn took a Obama figurine, and then placed it in the jar. The result? “Obama in Pee Pee” – which will soon be up for sale for $25,000.