"Obama Let Them Die" - Troops One Hour Away From Benghazi, Was Obama Regime Arming Al-Queda, Thus The Cover-Up?

It's hard to tell what is more outrageous: how the Obama Regime not only lied to the American people about the 9/11/2012 terrorist attack on our consulate in Benghazi and the cover up, or the Obama Lapdog Media assisting the Regime in the cover-up. 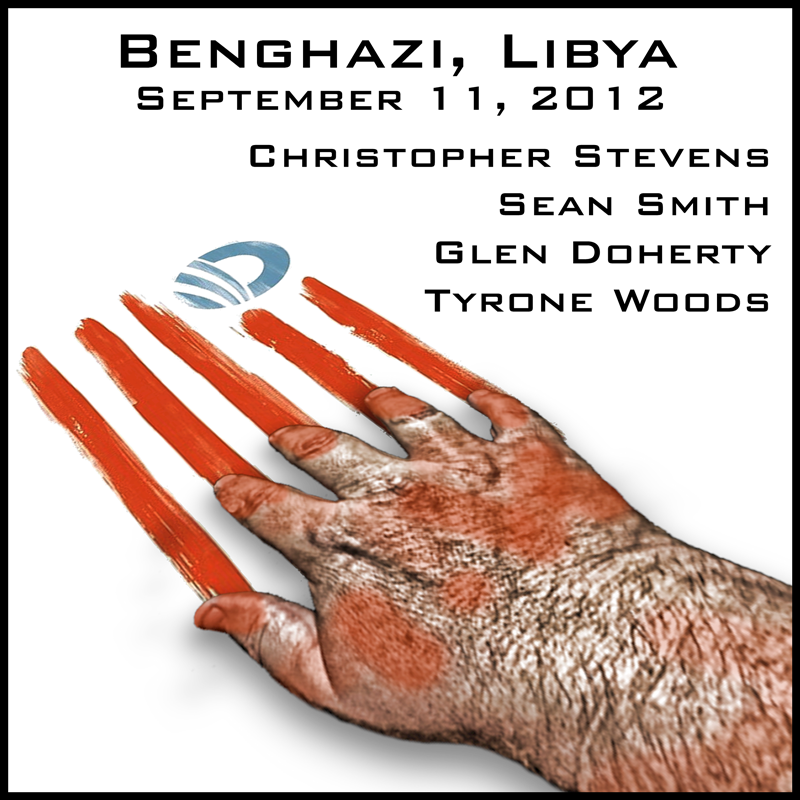 Obama has their blood on his hands - image via Gay Patriot

Some details are emerging and they're raising more questions.

It has been revealed that there were US troops an hour flight-time away in Italy.  The e-mail came in two hours after the attack and it lasted five more hours. The troops were not called upon to defend our ambassador.  Why?

At The Ulsterman Report, one WH insider says:

WHI: Benghazi story now breaking out even bigger. As promised. I was pissed the governor did not push the issue during last debate. Now I understand. I was not in the loop on that but that’s ok. Very smart move by the campaign. Don’t count on media falling over themselves to make this a headline though. That will be done with them kicking and screaming. And read that first report carefully. And then smile. The Old Man made this happen. At least some of it. It’s pretty much spelled out in first report. He’s got to have logged about 30,000 miles in the last month alone. Don’t know how he’s doing it healthwise. But he is. Thank God.

UM: So how does Benghazi story now play out?

WHI: Let the roll out complete itself. Then we watch and wait. Need enough in media to confirm, question, and then demand WH response. That will take about 48 to complete. Cannot guarantee success, but like our odds. It’s the timeline that is so offensive. Security could have been deployed within 3 hrs. At the most is what I was told. 3 hrs. There was a 7 hr. gunfight. With a break in between. Simple math. The ambassador and the other three could have been saved. Obama let them die. And I go back to why. What the f-ck were they covering up out there in Libya? That’s the info I really wish I had but for now, the emails are what we got and they sure as hell pin the Obama WH to the wall on this thing.

They knew it was terrorism within two hours and yet Obama went to sleep that night, gives a Rose Garden speech the next day blaming a YouTube video then jets off to Vegas to fund raise and says "we had a bad day."  Those optics sucked then and they look even worse now.

Is there an even deeper reason for the cover-up? Frank Gaffney, a former Reagan Administration official, wrote in the Washington Times (via Pat Dollard):

The evidence suggests that the Obama administration has not simply been engaging, legitimating, enriching and emboldening Islamists who have taken over or are ascendant in much of the Middle East. Starting in March 2011, when American diplomat J. Christopher Stevens was designated the liaison to the “opposition” in Libya, the Obama administration has been arming them, including jihadists like Abdelhakim Belhadj, leader of the al Qaeda franchise known as the Libyan Islamic Fighting Group.

Once Moammar Gadhafi was overthrown, Stevens was appointed ambassador to the new Libya run by Mr. Belhadj and his friends. Not surprisingly, one of the most important priorities for someone in that position would be to try to find and secure the immense amount of armaments that had been cached by the dictator around the country and systematically looted during and after the revolution.

One of the places in Libya most awash with such weapons in the most dangerous of hands is Benghazi. It now appears that Stevens was there — on a particularly risky day, with no security to speak of and despite now copiously documented concerns about his own safety and that of his subordinates — for another priority mission: sending arms recovered from the former regime’s stocks to the “opposition” in Syria. As in Libya, the insurgents are known to include al Qaeda and other Shariah-supremacist groups, including none other than Abdelhakim Belhadj.

Fox News has chronicled how the Al Entisar, a Libyan-flagged vessel carrying 400 tons of cargo, docked on Sept. 6 in the Turkish port of Iskenderun. It reportedly supplied both humanitarian assistance and arms — including deadly SA-7 man-portable surface-to-air missiles — apparently destined for Islamists, again including al Qaeda elements, in Syria.

What cries out for further investigation — and debate in the remaining days of this presidential election — is whether this shipment was part of a larger covert Obama effort to transfer weapons to our enemies that could make the Iran-Contra scandal, to say nothing of Operation Fast and Furious, pale by comparison.


Investigative journalist Aaron Klein has reported that the “consulate in Benghazi” actually was no such thing. He observes that although administration officials have done nothing to correct that oft-repeated characterization of the facility where the murderous attack on Stevens and his colleagues was launched, they call it a “mission.” What Mr. Klein describes as a “shabby, nondescript building” that lacked any “major public security presence” was, according to an unnamed Middle Eastern security official, “routinely used by Stevens and others to coordinate with the Turkish, Saudi and Qatari governments on supporting the insurgencies in the Middle East, most prominently the rebels opposing Assad’s regime in Syria.”


We know that Stevens‘ last official act was to hold such a meeting with an unidentified “Turkish diplomat.” Presumably, the conversation involved additional arms shipments to al Qaeda and its allies in Syria. It also may have involved getting more jihadi fighters there. After all, Mr. Klein reported last month that, according to sources in Egyptian security, our ambassador was playing a “central role in recruiting jihadists to fight Bashar al-Assad’s regime in Syria.”

It gets worse. Last week, Center for Security Policy senior fellow and former career CIA officer Clare Lopez observed that there were two large warehouse-type buildings associated with the so-called “consulate” whose purpose has yet to be disclosed. As their contents were raided in the course of the attack, we may never know for sure whether they housed — and were known by the local jihadis to house — arms, perhaps administered by the two former Navy SEALs killed along with Stevens.

What we do know is that the New York Times — one of the most slavishly pro-Obama publications in the country — reported in an Oct. 14 article, “Most of the arms shipped at the behest of Saudi Arabia and Qatar to supply Syrian rebel groups fighting the government of Bashar Assad are going to hard-line Islamic jihadists, and not the more secular opposition groups that the West wants to bolster.”

In short, it seems President Obama has been engaged in gun-walking on a massive scale. The effect has been to equip America’s enemies to wage jihad not only against regimes it once claimed were our friends, but inevitably against us and our allies as well. That would explain his administration’s desperate and now failing bid to mislead the voters through the serial deflections of Benghazigate.

If this allegation is true, this is outright treason.

This story needs to be spread to as many people as you know. As far as I'm concerned, November 6th isn't just Election Day, it is the day that the American people have the ability to do what Congress doesn't have the guts to do...Impeach Richard Milhous Hussein Obama and remove him from office.  This matter also needs to be thoroughly investigated to find out who did what and what laws were broken.

Forget Watergate or any other -Gate. American lives were lost because of this (as well as Fast and Furious).

Posted by MaroonedinMarin at 6:41 PM

Impeach the lyin' king , he now has zero credibility, unfit to lead the U.SA.