"Hating Breitbart" A Must See! A Fitting Tribute To His Legacy

If you are anywhere near Arlington, VA; Dallas, TX; Burbank, CA and St. Louis, MO, and you do only one thing this weekend, you MUST GO SEE the new movie "Hating Breitbart," which opened in those four markets last night! (Ticket info here)

If you're not in those areas, demand that "Hating Breitbart" be brought to a theatre near you!

I attended the 7:50 p.m. showing at the Regal Ballston theatre in Arlington, VA, in what was a packed house. 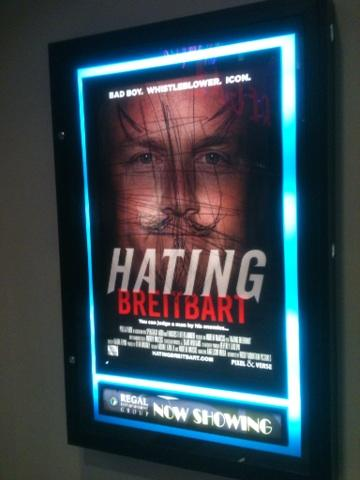 Those of us at CPAC 2012 got a taste of the movie, as an early trailer was shown right before Andrew Breitbart gave (unbeknownst to us) what was to be his last major speech before his untimely death a couple of weeks later.  The film had been finished before Breitbart's passing, and the only reference to his passing is a notation in the credits.

"Hating Breitbart" does a great job in illustrating the genius that was Andrew Breitbart, centering around some of the big stories he was involved with: The take down of ACORN with James O'Keefe and Hannah Giles, the rise of the Tea Party and the hateful attacks from the Left, the March 20, 2010 "Kill The Bill" Rally and the false allegations by Rep. Andre Carson that he and the Congressional Black Caucus were called the "n-word," the Shirley Sherrod story, and "Weinergate."  The movie also shows Breitbart in various "behind the scenes" locations (hotels, cars, backstage at speeches), as well as clips of some of his speeches at the 2010 Tea Party Convention, CPAC, the Tea Party rally in Searchlight, NV, and the 2010 Tax Day Tea Party and 9/12 march in Washington DC.  The viewer also gets to see the other side of Andrew, how approachable he was at these events to attendees.

The film also documents the unhinged hate Breitbart received from Leftists, like the "Dingy" Harry Reid supporters in Searchlight, NV who had just egged the Tea Party Express bus, protesters at an anti-Glenn Beck rally, and unhinged libs calling him a racist at the NutRoots convention.

On Thursday evening, Breitbart.com released a 20 minute sneak preview of "Hating Breitbart," which is linked below. It centers on the phantom "n-word" accusation, and how Andrew Breitbart took the ball and defended the Tea Party movement against these phony allegations. Breitbart used the megaphone he had to turn the argument around, noting that since the CBC had taped their walk through the crowd, they should prove their allegations. In the end, they never did.

For purposes of disclosure, I must note that a video I filmed that day and posted on YouTube is in this part of the movie, as well as a nine-second video clip also taken that day. That nine-second clip is the one I gave to Breitbart almost a month later (See this post for more of that story). Additionally, I'm also in one scene talking to Breitbart as he's headed to the stage to speak at the 9/12/2010 rally in Washington DC (see American Spectator piece "An Army of Breitbarts" by Robert Stacy McCain).

To show the level of vitriol these unhinged liberals still, in death, have for Andrew, I've just seen news that at the 10:20 p.m. showing of the movie in Arlington, VA was interrupted by some moonbat yelling allegations that Breitbart was a "cokehead." There is suspicion the heckler is Huffington ComPost writer Ryan Clayton, who is also in the movie and claimed (with no proof) Breitbart was a coke addict. You can tell how much of a hateful person Clayton is by looking at his face in the scene.

Well, all I can say is that Ryan Clayton or whomever it was that was yelling this garbage during the movie is damn lucky they weren't at the 7:50 p.m. showing.  Why? Because just as Andrew Breitbart told me on Sept. 12, 2010  "keep your eyes out," I'd have had my iPhone in video mode on your pathetic ass as you were being escorted out of the theatre.

"Hating Breitbart" is a fitting tribute to the legacy of Andrew Breitbart, and a reminder of who we lost with his untimely death.  Seven months later, it's hard to believe that man with such energy and passion is no longer with us. His legacy is that any one of us can break a story and "Be Breitbart."  To those of us in the new media, it is up to us not just to remember him, but keep his memory alive by picking up where he left off.

To that end, it's somehow fitting this movie is released 18 days before the most important election of our lifetimes, as well as our nation's history. With that in mind, perhaps it is fitting to say we should spend the remaining days up to November 6 to "Win This One For Andrew."  Not just getting rid of Richard Milhous Obama, but keeping the House and taking the Senate as well.

Friday I heard Andrew Marcus mention you via a story he was telling Mike about how good of a memory Andrew had and he told of your encounter with him after you had given him that 9 second video several months prior. He recognized your voice as you called out from behind him, he turned around and said "Marooned? Marooned In Marin is that you?" I heard this on KSFO about 11:35 AM. Congratulations on the plug!

Thank you! And thanks for posting that mention on the Huckabee show.

You are welcome! It is rare to hear Marin mentioned on a conservative show in a good way :)

I hope the lack of Obama 2012 bumper stickers here is a good sign!