CAUTION! Let's Not Get Cocky, But Things Are Looking Very Bad For Obama

Keep in mind, we still have 19 days before November 6. Still, there's a lot of indicators that are pointing in one direction: the walls are beginning to crack on Obama's re-election campaign.

First sign. The Gallup poll today has Romney up one point from yesterday: 52 to 45 percent.  That number is very significant! Karl Rove pointed out yesterday that no Presidential candidate this late in October has lost with a poll number like Romney has.
Second: Kevin DuJan at HillBuzz wrote how Obama is planning his Election Night festivities at McCormick Place in Chicago, NOT at Grant Park, as he did in 2008 and that drew over 200,000 people. 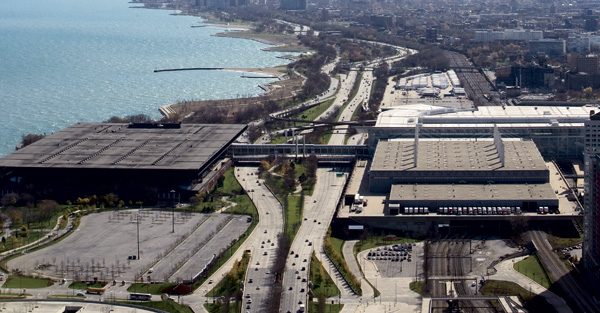 I’ve suspected for some time that Obama was going to plan for a concession speech on November 6th, but last night final confirmation arrived in the form of leaked news that the Obama election night event is being staged in private McCormick Place, not a big public setting like Grant Park.

Let me put this as clearly as I can because it’s crucial: if Democrats really thought Barack Obama was going to be reelected, then they would have planned a massive rally in Grant Park again; the fact this is not happening is proof that, despite what you hear coming out of the Ministry of Truth that is the national media, the Democrats really do not expect Obama to win this election. Campaign operatives in Chicago are, thus, making appropriate preparations for his imminent defeat.

Instead of Grant Park, Obama’s apparently going to have his election night event at McCormick Place…the convention center here in Chicago.

Let me explain a few things about McCormick Place that you could intimate from the photo above:

* it’s separated from the City by highways and is hard to reach by anyone traveling on foot from the various “El” trains that service Chicago…which indicates this event is not intended for throngs of Obama supporters.

* there are no buses that readily service McCormick Place like they do Grant Park…so once again, this event is not being planned for the public to come and celebrate with Obama.

* McCormick Place is completely indoors and is a venue that Democrats can easily control in terms of the camera angles and stagecraft of the event…which is a big deal because losing campaigns choose small, isolated places to hold concession speeches while winning candidates are feted on election night in, well, places like Grant Park.

I was an event planner here in Chicago for several years before the 2008 presidential campaign. I planned events in McCormick Place for various trade shows; it’s a building designed with flexibility for downsizing an audience if the need suddenly arises so that the participants do not feel lost in too much extra space. There are modular walls that achieve this, with dividers capable of cutting a space in half…and then in half again…if that’s what needs to be done to make a sparse crowd seem bigger for cameras.

Despite being within sight of the Museum Campus and Soldier Field, McCormick Place is a fortress-like island surrounded on most sides by freeways or railroad tracks (with the lake on the other side). This is where the G-8 summit was held, so the dignitaries could be isolated and kept as far away from the public as possible in downtown Chicago. Because the only realistic way of reaching McCormick Place is by taxi (or car, if people drive themselves) this is clearly not a place Obama would be holding an election night event if he really thought he was going to win the election. How on Earth would his throngs of supporters be able to reach him if he won and the event was held here of all places?

What DuJan writes is about McCormick Place is true. I was there for work a few years ago. Convention centers, while being big buildings, are not built that way for one event, like a basketball arena. There's an expo center, tons of hallways, break out rooms, etc. Plus, compared to other conventions I've been at, hotels are usually close by, within walking distance. I stayed in a hotel close to Grant Park when I was in Chicago for business, and had to take a five to 10 minute shuttle ride to McCormick Place. I also remember how the Chicago Hilton had a big deal in their lobby, noting it was the base hotel for the 2008 Election Night festivities. Grant Park was close-by. McCormick is further away.
Third: There's a report that the Obama campaign is pulling out of several "battleground" states like Florida, North Carolina, and here in the Commonwealth of Virginia, to mount a "last stand" in places like New Hampshire, Nevada, Iowa and Ohio.
Fourth: It appears "Slick Willie" Clinton got his revenge for all the attacks on him and Hillary in 2008, being called a racist, and for Hillary taking the fall for what Obama was too cowardly to do (Washington Examiner  via Gateway Pundit.

"Governor Romney's argument is, we're not fixed, so fire him and put me in," Clinton said, speaking to voters this afternoon. "It is true that we're not fixed," Clinton added. "When President Obama looked into the eyes of that man who said in the debate, 'I had so much hope four years ago and I don't now,' I thought he was going to cry, because he knows that its not fixed."

Man, did you hear that!
Finally, ask yourselves, is using "women in binders," and Big Bird against Mitt Romney enough to inspire people in a down economy, and after a terror attack that the Regime lied about, to re-elect him for another four years? Is that your plan for a second term?
Like I said, let's not get cocky, but the only poll that matters is the one that is counted on November 6th 2012.
Posted by MaroonedinMarin at 3:54 PM