This was from last night's edition of Hannity (video via This Ain't Hell).


In another post, Jonn at TAH goes into the game of finger pointing and evasion coming from 1600 Pennsylvania Ave.


But in the vacuum of non-answers from the President, the White House’s National Security Council spokesman Tommy Vietor recently told the folks at Yahoo News that “Neither the president nor anyone in the White House denied any requests for assistance in Benghazi” which still doesn’t answer the question. Since the Defense Department and the CIA have both told the media that neither of them denied fire support for the embattled Americans in the consulate, the who was it? It only leaves the State Department without a denial.

Our new buddy, William Kristol at the Weekly Standard claims that only the White House could have made the decision to intercede, so someone isn’t being forthcoming with the American people who are clamoring for answers. COB6, a long-experienced special warfare officer, himself, agrees;

Only two places could have called off the attack at that point; the WH situation command (based on POTUS direction) or AFRICOM commander based on information directly from the target area.

If the AC130 never left Sigonella (as Penetta says) that means that the Predator that was filming the whole thing was armed.

If that SEAL was actively “painting” a target; something was on station to engage! And the decision to stand down goes directly to POTUS!

From the Fox News link;

Obama also said in the TV interview, as he said previously said, the administration is going to “investigate what happened to make sure it never happens again” and find out who was involved in the attack so they can be brought to justice.

Yeah, at this point, I think the only way we’re going to make sure that it doesn’t happen again is to remove everyone who was involved in the decision-making on this instance come election day. Since the president is so adamant about NOT making this an election issue only makes me want to make it MORE of an election day issue. That might be the only way to get any straight answers out of this White House.


The more that comes out about what happened, the more it should become an election year issue.  Why? Because the number one responsibility of our federal government is protecting America. How can you do that when the "Commander-in-Chief" is willing to cut spending on the backs of the military, but is also unwilling to make the "gutsy call" to protect Americans and our assets when they are under attack from our enemies.

It's fair to say that Obama's campaign slogan of "Forward" needs an update. Here's my proposal. 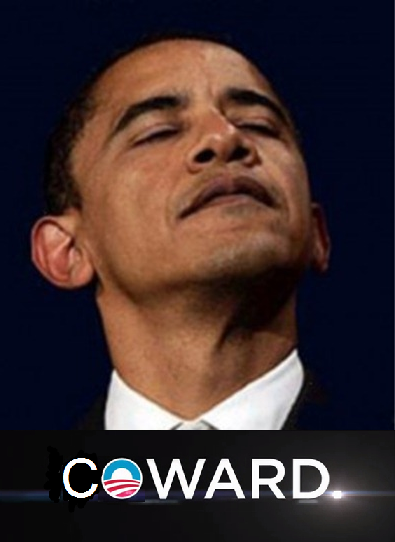 Posted by MaroonedinMarin at 2:09 PM