Of course, the silence is deafening (The College Fix).

A piñata shaped like a white woman was strung up to a tree at the University of Memphis, then African-American students took turns beating it with a stick.

Where is Al Sharpton when you need him? Isn’t this a shocking case of racism?

No, actually it isn’t. Turns out the students involved were mere grade school kids, brought on campus for a special “Luau” party sponsored by the university. The piñata was supposed to represent a hula dancer. 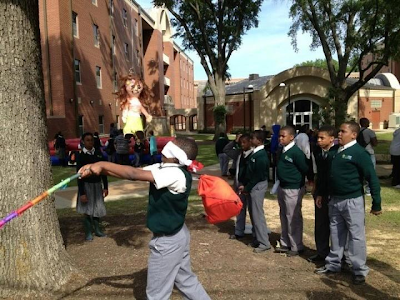 “We want to assure our community that no racial or gender animosity was intended,” said a university spokesperson.

At worst, this seems like a bad case of multicultural confusion. (Hawaiian luau + Mexican-style piñata = what cultural tradition exactly?)

Luckily, in this case, the racial dynamics were not reversed, with white students and a black piñata strung up to a tree. Imagine the controversy that would have generated.

Nevertheless, the university was compelled to explain itself when the picture started generating backlash after it was posted online.

It’s a sad thing when a few kids can’t swing at a piñata without unleashing an avalanche of racial grievances. But that’s the reality we live in.

First of all, the pinata doesn't look like a hula dancer. Second, the imagery of anyone (regardless of color) hitting a woman with a stick, and with skin color reversed, obviously didn't cross the mind of the genious who set this event up.
Posted by MaroonedinMarin at 4:38 AM

Email ThisBlogThis!Share to TwitterShare to FacebookShare to Pinterest
Labels: race

See now, if you'd said a "n" was beatin' a white woman with a stick, Al and Gang would be all over you like white on rice...