Is this part of his WTF strategy? (Ben Shapiro - Breitbart.com).

Today, the National Journal reported that a senior State Department official has announced, “The war on terror is over.”

“Now that we have killed most of al Qaida,” the source said, “now that people have come to see legitimate means of expression, people who once might have gone into al Qaida see an opportunity for a legitimate Islamism.”

This, of course, is utter foolishness. Islamism is a religious ideological movement that brooks no real alternatives – so while the State Department proclaims “a legitimate Islamism,” it fails to acknowledge that Islamism, “legitimate” or not, is deeply intolerant of any other modes of expression. Not only that, but Islamism works hand-in-glove with terror groups around the world. Simply because a regime does not openly house al Qaida does not mean that the regime doesn’t support al Qaida; just because a regime pretends at democracy doesn’t mean that it has real democratic values. 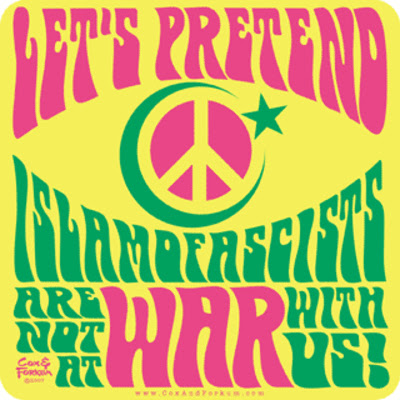 In truth, Obama isn’t declaring an end to the war on terror – terrorism continues unabated each day in Egypt and the Palestinian territories and Iraq and Afghanistan and Sudan and Yemen and Syria and Lebanon and a dozen other hotspots around the globe. Obama is truly declaring an end to the war on Islamism. He has made his peace; he has surrendered. In doing so, he has condemned broad swaths of the world to darkness, and more immediately, he has condemned America to a defensive position in the world. Now there is no proactive America shaping the world to her own ends. Now there is only an atomistic world, a series of billiard balls, in which America waits to be struck before bouncing back.

To Obama, the war on Islamism may be over. For Islamists, the war on America is far from over.

This is delusional thinking on the part of the Regime. Iran is closer to building a nuclear weapons, and the Regime (with the lapdogs in the media) have praised the so-called "Arab Spring" which is nothing more than the rise of radical Islam under the Muslim Brotherhood.

Obama has gotten cozy with the Muslim Brotherhood and their allies. The Regime has allowed the Brotherhood to review and edit FBI training manuals, held meetings with them in the White House and given them $1.5 billion of our money without Congressional approval.

This isn't victory, it's surrender by liberal Democrats for a war they never wanted to fight.
Posted by MaroonedinMarin at 4:55 AM