The privacy (or lack of) consequences of social media have come into play in Miami for a Miami/Dade firefighter weighing in on the Trayvon Martin killing. (thegrio.com, via FreeRepublic).

The Miami-Dade Fire-Rescue Department is investigating a Facebook post by one of its captains that seems to blame the shooting death of Trayvon Martin on the "shi*tbag parents" of "our urban youth," and the "ghetto hoodie look" of young black men like Martin. 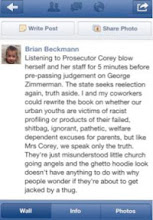 The entry was posted on the personal Facebook page of Miami-Dade fire captain Brian Beckmann. The Facebook page bears the same profile picture as the entry, which appears to have been deleted, but which was captured in a screengrab sent to theGrio.

The entry appears to have been created on Wednesday, the night State Attorney Angela Corey announced she would file second degree murder charges against George Zimmerman in Martin's shooting death.

"Listening to Prosecutor Corey blow herself and her staff for five minutes before pre-passing judgment on George Zimmerman," it read.

"The state seeks reelection again, truth aside. I and my coworkers could rewrite the book on whether our urban youths are victims of racist profiling or products of their failed, sh*tbag, ignorant, pathetic, welfare dependent excuses for parents, but like Mrs. Corey, we speak only the truth. They're just misunderstood little church going angels and the ghetto hoodie look doesn't have anything to do with why people wonder if they're about to get jacked by a thug."

Beckmann responded to questions about the page in a Facebook message, saying "I am a private citizen and have the same right to freely express an opinion on any subject that anyone else does. I choose not to embellish or alter the facts as your employer chose to do."

The source who provided theGrio with the Facebook entry expressed concern that the comments reflected "the thoughts of someone who responds to the homes of the very people" being denigrated in the post.

Over at the Miami Herald:

Reached by a reporter Sunday, Beckmann said: “It’s under investigation. I can’t talk to you.”

The investigation and racially-charged entry on the private Facebook page is an example of how employers both private and public struggle to balance free speech and conduct that may reflect poorly on an employee.

Lee Rainie, Director of the Pew Research Center's Internet & American Life Project, called this kind of incident “one of the great challenges of the digital age.”

“Organizations often want all the advantages of social media to promote themselves and their missions, but struggle to figure out the boundaries for their employees. The law sometimes is not at all clear about where the border between free speech and organizational rule-making can be drawn.”

He added: “At the individual level, people are in a brand new world where they have to think about – and manage – a variety of ‘publics.’ In social media it is pretty easy for people to believe that some social media postings are more or less private, when it fact it just takes a few clicks for them to become very public acts with a big audience. It’s unprecedented. It’s unnerving. And it requires a new set of social skills to manage properly.”

So, if what this firefighter said as a private citizens is such a problem, mabye the Mayor of Philadelphia should be fired? After all, he was attacking "hoodies" and this "gangsta" attitude last year.

Posted by MaroonedinMarin at 4:58 AM

As they say, "sometimes the truth hurts". Apparently this comment hit a nerve, and that's what's bugging them. Perhaps if they'd quit denying the cause and treat it more like Nutter and Cosby do, there would be a tide change! Another great saying, "honesty is the best policy". God forbid we hear any of that!

The story is about Miami Firefighter which is so brilliantly present and i hope will get more when i will come next time on this blog. so keep it up.