"Senior Fellow" Eric Boehlert of the George Soro$ funded Media Mutters, tweeted with glee a link from Talker's Magazine that Rush Limbaugh may be "booted off" his talk radio home in Philadelphia (h/t @muddlemuddle via Twitter). 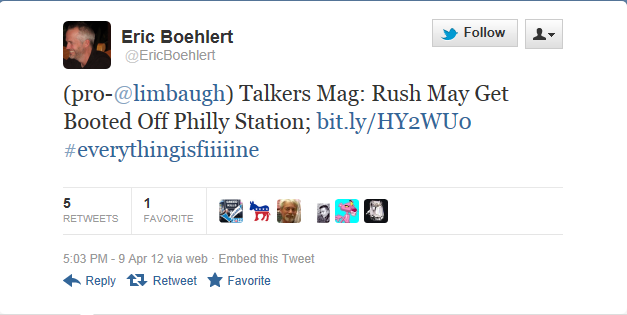 As usual with Media Mutters, truth becomes a moving target. Rush is leaving WPHT in Philly to go to a FM station (NY Slimes, via FreeRepublic.com).

But Premiere has indicated that it will be moving Mr. Limbaugh to a new station in Philadelphia. Radio-Info.com reported on Monday that it might be WKDN, a Christian programming station that is expected to be turned into a news-talk station soon.

To the untrained eye, it would appear to be a step down for “The Rush Limbaugh Show.” WKDN, with a 38,000-watt signal, is a smaller station than WPHT, which has a 50,000-watt signal. But WKDN is an FM station, while WPHT is an AM station, and Premiere has shown interest in moving its talk radio shows over to FM stations lately.

Nice try in making your fascist attempt to silence Rush appear to work, Eric!
Posted by MaroonedinMarin at 4:45 AM