The Latest Liberal Lie Put To Sleep...Nazis Are Patrolling Sanford, FL (They're Not)

A rumor has been going around that some Nazi group (reminder: Nazi stands for National Socialist Party) is now patrolling the streets of Sanford, FL. The rumor has been picked up by various Libtard blogs and even news outlets in Miami and New York.

But Prof. Jacobson at Legal Insurrection actually did the footwork to practice something that was once known as "journalism."

Is there any evidence that this is actually happening in Sanford?

My initial e-mail (which included an embedded link to the Memeorandum thread):

“There are a number of reports in the media that Neo-Nazis are conducting armed patrols in Sanford. Can you confirm or deny whether this is true, and provide any information you have on the subject? If someone is able to get back to me as soon as possible (and before Monday) that would be appreciated, since such rumors are spreading.”

“At this time the City of Sanford has not confirmed the presence of Neo-Nazis groups.”

“You say “not confirmed.” Is there any indication of such patrols that the Department is aware of?”

“We have no indication of any such patrols at this point in Sanford. The only large gathering was the children and their parents at the Easter egg hunt.”

I can’t say this is the worst example of rumor mongering and irresponsible conduct by bloggers and the mainstream media I have ever seen, but it’s a contender.

For The Daily Beast, Huffington Post, Mediaite, and The Daily News to spread such thinly-sourced claims without verification at a time when racial tensions already are high is irresponsible in the extreme.

One of those shamelessly spreading this rumor was Charles "Icarus" Johnson, the failed "jazz" guitarist/blogger whose mind must have become so warped by cannabis use that he has paranoid delusions of Nazis appearing everywhere (no link for that jerk off). 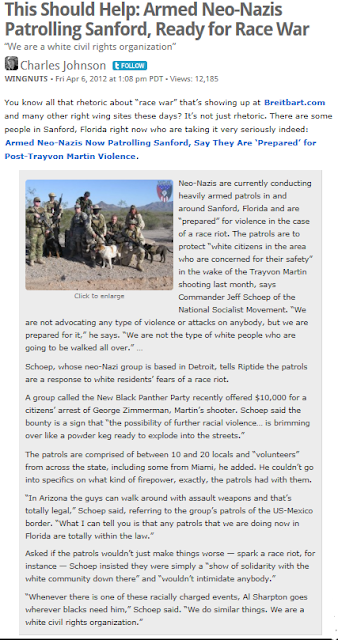 "Icarus" has a track record of sending some of his "Lizards" (namely Kilgore Trout) to post racist comments on conservative blogs and then shout "RAAAAACISM."
Posted by MaroonedinMarin at 2:05 PM