It's bad enough the US Navy lowered themselves to naming a ship after that deceased traitor, Congressman Jackoff "The Haditha Marines Killed Civilians In Cold Blood" Murtha.  Now, a Democrat Congressman from California wants the Navy to name a ship after martyred gay icon, San Francisco Supervisor Harvey Milk (Navy Times, via This Ain't Hell).


An upcoming addition to the Navy’s fleet may be the USS Harvey Milk if Rep. Bob Filner, D-Calif., and other San Diego gay rights leaders have their way about it.

The GLBT Historic Task Force of San Diego County and Filner sent letters to Navy Secretary Ray Mabus and Defense Secretary Leon Panetta last week asking for Harvey Milk to be considered as a name for a submarine, carrier or other appropriate vessel, according to a PR Newswire press release.

Milk, a late civil rights icon, was a Navy veteran who served aboard the submarine rescue ship Kittiwake as a diving officer during the Korean War. He went on to be a diving instructor at Naval Station San Diego. Milk, whose parents both also served in the Navy, was honorably discharged at the rank of lieutenant junior grade.

In his letter, Rep. Filner wrote “this action would be a fitting tribute to Mr. Milk’s support for equality, an ideal exemplified in the military’s recent repeal of its former Don’t Ask, Don’t Tell policy,” according to the press release.

Of course, the only reason this is even being discussed is because of how Milk, along with then San Francisco Mayor George Moscone, were brutally gunned down in late 1978 by former city supervisor Dan White, over a disagreement with the mayor about getting his supervisor's position back.


Rarely discussed about Milk is his political association with the Rev. Jim Jones of the Peoples Temple cult in the San Francisco Bay Area. Jones was an influential community organizer in the Bay Area Left wing community, and Milk (as did Moscone) used Jones' volunteers to get into political office.  Gay Journalist Randy Shilts, in his book The Mayor of Castro Street, quotes Milk on Page 139 as saying about the Temple:


"Make sure you're always nice to the Peoples Temple," he admonished her. "If they ask you to do something, do it, and then send them a note thanking them for asking you to do it. They're weird and they're dangerous, and you never want to be on their bad side."


"They're weird, but they're good volunteers," Harvey told her. "You take help where it comes from, but don't trust them."

Milk even wrote the following letter, found in historical archives to Rev. Jones, stating how his "name is cut into stone in support of you your people." 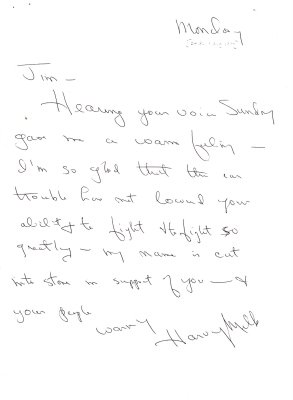 Milk even authored a letter in support of the Rev. Jones to then President Jimmy Carter. 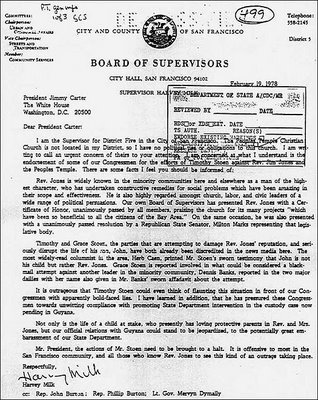 So, why has the naming of Navy ships become a politically correct exercise?
Posted by MaroonedinMarin at 6:13 PM