BREAKING: Photo Shows George Zimmerman With Bloody Gash On Back Of Head

Well this sure changes things (photo from abc.com). 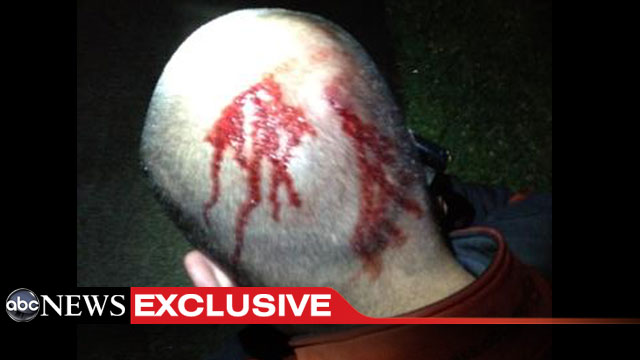 ABC News exclusively obtained a graphic photograph of George Zimmerman’s head covered in blood that was taken just three minutes after the shooting that left 17-year-old Trayvon Martin dead. This news comes as Zimmerman is set to go before a judge in a bond hearing on Friday.

The picture shows two cuts on the back of Zimmerman's head with blood trickling down.

Zimmerman, who shot and killed 17-year-old Martin on February 26 in a gated Sanford community, claimed he killed Martin in self-defense. Zimmerman is charged with second-degree murder for the shooting death of Martin.

The photograph appears to be the first publicly disclosed piece of evidence that could help support Zimmerman’s claim of self-defense. Sources tell ABC News that investigators have seen the photograph and are aware of the photographer’s story.

The person who took the photograph told ABC News he heard Martin and Zimmerman fighting before the shooting and that after Martin was killed, Zimmerman asked the photographer to call Zimmerman’s wife, allegedly blurting out, “Man, just tell her I shot someone.”

GPS and other data embedded in the photo shows it was taken at the scene with an iPhone just three minutes after the shooting, according to ABC News.

Posted by MaroonedinMarin at 5:32 AM