Allen West Is Right About Progressive Caucus Being Commie Pinkos...I Can Give One Example: Lynn Woolsey

Liberal Democrats and their media lapdogs have their panties in a knot over Florida Congressman (and Lt. Col. Ret.) Allen West saying that 80 Democrats who are members of the Progressive Caucus are communists.

Reps. Hank Johnson (D-Ga.) and Keith Ellison (D-Minn.) on Thursday dismissed claims made earlier this week by Rep. Allen West (R-Fla.) that they and other members of the Congressional Progressive Caucus were members of the Communist Party, and encouraged all members to stop making these sorts of charges.

"It's not true. It's a false statement. It is unfair. It is unkind," Ellison said on the House floor. "It's tough out here already, we don't need verbal false accusations against each other."

West is not backing down.

"No, I don't regret it whatsoever," West said in response to a reporter asking about his comment. The freshman Republican, who took the question while participating in a panel discussion at conservative think tank The Heritage Foundation, then proceeded to double down in his belief about liberal Democrats being communists.

West landed in hot water last week for telling constituents in a town hall meeting that lawmakers in the Congressional Progressive Caucus are members of the Communist Party. His remarks sparked outrage among scores of Democrats, including Rep. Barney Frank (D-Mass), who said "not even Joe McCarthy would have said anything so stupid."

And Allen West, a great patriot, shouldn't regret his words, because they're accurate. I can prove two examples in one illustration.

In September 1999, the Communist Party USA newspaper, Peoples Weekly World, was holding a gala fundraiser at some restaurant in Commietown, CA (Berkeley). Here is an ad for the event. 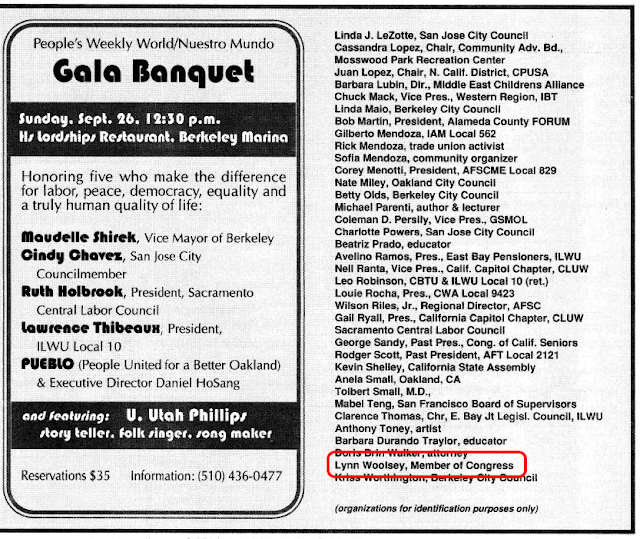 One of the co-sponsors of the event was my former Congressperson, Lynn Woolsey, who represents Marin & Sonoma counties in California. Woolsey is not only a member of the Progressive Caucus, she was also a co-chair of the pinko group.

Another co-sponsor of this event, along with Woolsey, was Barbara Lee, also member of the Progressive Caucus who took over the East Bay Congressional seat held by her mentor, Ron "Red" Dellums.

So, Allen West is right. For those who have been confused, "progressive" is another way that communists use to sugarcoat their extremism, just like founding groups with innocent names like People for the (un)American Way.
Posted by MaroonedinMarin at 6:31 PM