The 13 year old daughter of Richard Milhous Obama, Malia, is in Mexico during Spring Break, with some classmates and Secret Service protection. Why her parents allowed that, I have no idea.

But something else is happening. Stories that first appeared of the trip are disappearing from the Internet (Death by 1000 Papercuts, via Gateway Pundit).

Why were the news reports yanked?

Who ordered them removed?

Were the reports removed for ‘security’ reasons?

Huffington Post, AFP and The Telegraph removed their reports the day after Mexican internet news sites filed reports with photos of Malia

Here's one example, the UK Daily Mail. When you do a Google search, you can get a link and (for now) a cached preview page). 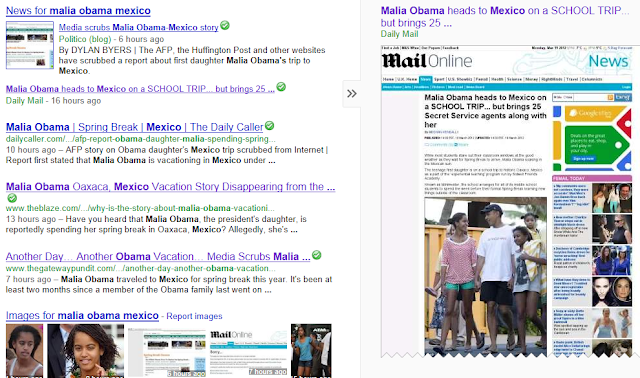 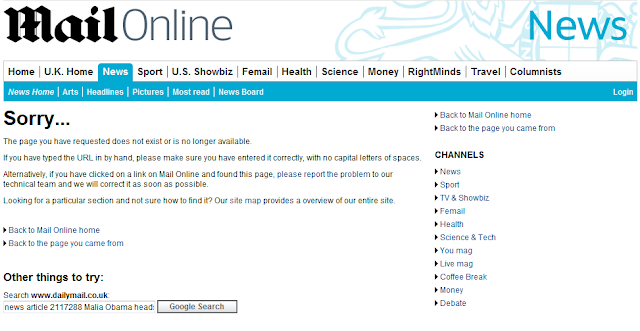 So, what's this all about? What does the "Most Transparent Presidency Evah" want to hide?

UPDATE: Via Politico, the White House was behind the story being scrubbed.

From the beginning of the administration, the White House has asked news outlets not to report on or photograph the Obama children when they are not with their parents and there is no vital news interest. We have reminded outlets of this request in order to protect the privacy and security of these girls.

Well excuse me! First of all, you tell American students during Spring Break that vacationing in Mexico might not be a good idea, then allow the President's 13 year old daughter to go down there with her classmates and taxpayer paid Secret Service protection.

Finally, what parent allows their 13 year old to fly off to another country for Spring Break?

Look, I can understand asking media outlets to kill a story if it involves National Security, but this is ridiculous and only shows how the media are noting but lapdogs for this Regime. It's been well documented (and I know of a few stories) of journalists who have been left out of WH press parties because they dared to ask real questions of the Regime.
Posted by MaroonedinMarin at 4:21 AM

Email ThisBlogThis!Share to TwitterShare to FacebookShare to Pinterest
Labels: Culture of Corruption, Obama