The Left-wing War on Rush isn't just on his advertisers, it's also against musicians whose music has been used as bumper music on his show.

I wrote the other night about how Rush, the Canadian power trio, sent off a "cease and desist" letter to Limbaugh, in which many long-time fans of the band, (myself included) have said we will no longer buy their music or attend their concerts.

It appears the band's management had been alerted by a liberal blogger named Bob Cesca, who writes at the Huffington ComPost.

Yesterday, I contacted Anthem Entertainment and Rush (the band) about Rush Limbaugh's airing of its music on his show, and today I was exclusively informed that the legendary Canadian rock group has formally demanded that the Rush Limbaugh Program stop using its music on the air.

For years now, Rush Limbaugh has been playing Rush music (get it?) as bumpers out of his commercial breaks, including the tracks "Bravado" and "The Spirit of Radio." In fact, when Limbaugh attacked Sandra Fluke and remarked about seeing sex tapes of Fluke in exchange for birth control pills, Limbaugh was playing the popular Rush track "The Spirit of Radio" under his rant.

So, Geddy, Neil and Alex took action based on the words of a liberal who is anything but a beacon of civility. 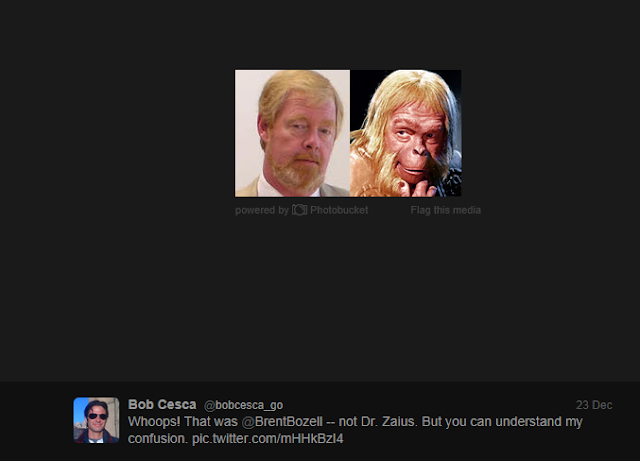 When Sarah Palin defended herself from the vicious attacks and slander from liberals after the Tucson shooting, Cesca was one of those who attacked her. 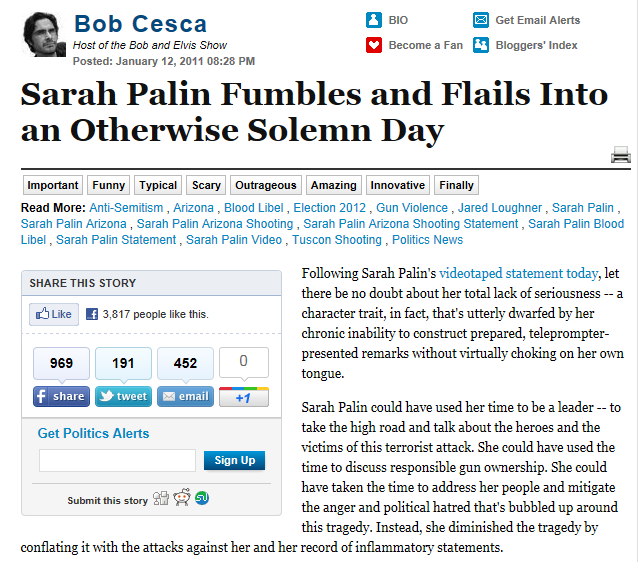 Sarah Palin could have used her time to be a leader -- to take the high road and talk about the heroes and the victims of this terrorist attack. She could have used the time to discuss responsible gun ownership. She could have taken the time to address her people and mitigate the anger and political hatred that's bubbled up around this tragedy. Instead, she diminished the tragedy by conflating it with the attacks against her and her record of inflammatory statements.

And, along the same line, arguably the biggest gaffe of today's narcissistic word salad was her use of the phrase "blood libel." So not only did she opt to whine about her critics on a day when real heroes and real victims will be memorialized, but she also compared the criticism and stress she's endured throughout the last four days to thousands of years of anti-Semitic religious persecution endured by Jews.

Can you imagine how she'll react in a crisis should everyone go insane and elevate her to the White House? "Rachel Maddow is committing a holocaust against me. Wah! Feel sorry for me! Oh, and by the way, we're invading Mexico. God Bless America. And my life is as tragic as a German Jew in 1943, also. Good night!"

...What can we divine from all of this? One thing is obvious right off the bat. Combined with a staffer's laughably flimsy "surveyors crosshairs" excuse, her speechwriting staff appears to be almost as incompetent with words as Palin herself, who once famously said the vice president role is "position flexible" and, you know, the "refudiate" thing. All told, a Palin campaign for president would be one long Hee-Haw sketch, with less polish and more laughs.

And this beacon of liberal civility wants to go after Rush Limbaugh?

And to you, Geddy, Neil, Alex. Is this what you have become, in your long quest to get mainstream acceptance after 40 years? Have you figured that the way to get into the Rock & Roll Hall of Fame is not based on your own merits, but cozying up to the favor of the liberal inteligencia who write for Rolling Stone and other publications?

Well, sorry guys, I guess Neil's words in "The Sprit of Radio" were prophetic, that "glittering prizes and endless compromises" have shattered the illusion of your integrity.

That goes for you too, Kim Wilson of the Fabulous Thunderturds! But I haven't bought a record of yours in over 20 years, cause you've sucked ever since my buddy Jimmie Vaughan left the band.
Posted by MaroonedinMarin at 4:06 PM

For someone who claims to have purchased their music, you either didn't listen to them or the lyrics went right over your head.