I took this photo on my iPhone over the weekend when I was gassing up the car (credit Doug Ross for inspiration of adding a certain golfer to photo). 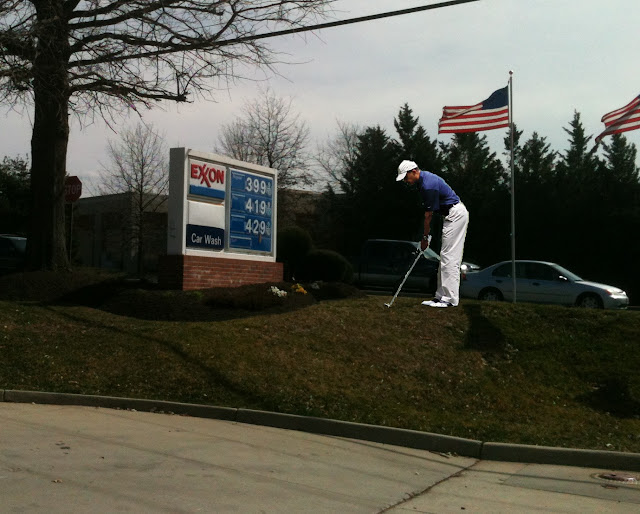 My buddy Donald Douglas at American Power posts a photo of gas where he's at, in Orange County, CA...right at $5.00 for regular unleaded. He also links to a Washington ComPost story on how these high gas prices are crashing Obama's poll numbers.

Disapproval of President Obama’s handling of the economy is heading higher — alongside gasoline prices — as a record number of Americans now give the president “strongly” negative reviews on the 2012 presidential campaign’s most important issue, according to a new Washington Post-ABC News poll.

Increasingly pessimistic views of Obama’s performance on the economy — and on the federal budget deficit — come despite a steadily brightening employment picture and other signs of economic improvement, and they highlight the political sensitivity of rising gas prices.

The potential political con­sequences are clear, with the ­rising public disapproval reversing some of the gains the president had made in hypothetical general-election matchups against possible Republican rivals for the White House. Former Massachusetts governor Mitt Romney and former senator Rick Santorum (Pa.) now both run about evenly with Obama. The findings come just five weeks after Obama appeared to be getting a boost from the improving economy.

This "improving economy" meme is a joke. No one believe it, or the mirage that employment is picking up. If you've worked in a place where they're not filling positions someone has left, or you still have a part time receptionist after almost two years, that's a sign.

Also, 80 percent of Americans say they're not better off than they were four years ago. The Regime, as well as "Dingy" Harry Reid and their media lapdogs are dismissing it, but it's true. We just did our taxes, and have never paid as much as we have. Guess what libs? We're not even close to being "one percenters!"
Posted by MaroonedinMarin at 4:26 AM