In response to the controversy liberals created over Rush Limbaugh and the Fluke named Sandra, Capitol One (based in nearby McLean, VA) stated to the George Soro$ funded Think Progress they did not want their ads to run on Limbaugh's radio show.

But they have no problem with the Raging Liberal Bully Alec Baldwin being their spokesmouth. 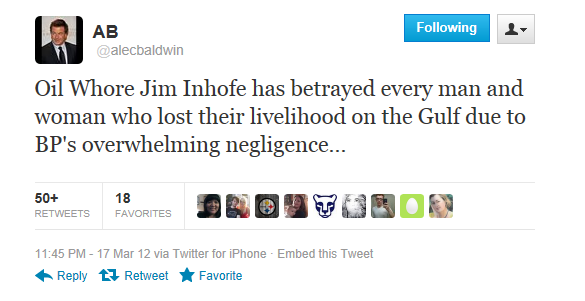 He wasn't finished, he had to include a gay reference:

Interestingly, Baldwin later took time on Twitter to promote a movie on Bullying.

Anti-bullying Alec Baldwin, you mean the abusive asshole who said this to his daughter


Or the guy who invited some of the most hateful, racist, misogynist tweets to Michelle Malkin.

So, if Capitol One won't have anything to do with Rush Limbaugh, why do they have an unhinged, abusive liberal as their spokesperson.

Hey Rich Fairbank at Capitol One, I'm talkin to you!
Posted by MaroonedinMarin at 11:11 AM

I always feel like such an old square when I read these things. I don't get it. Why a bar? Do bar people all support global warming or something?