On Friday, instead of acting like a leader and cautioning America not to rush to judgement until all the facts in the tragic killing of Trayvon Martin are known, Richard Milhous Obama instead brought race into this and had to insert himself into this. (Politico)


Rush Limbaugh blasted President Barack Obama on his radio show Monday for saying that if he had a son, “he’d look like Trayvon [Martin],” accusing the president of seizing on the shooting of the unarmed African-American teenager last month as a “political opportunity.”

“It is the least important thing, what the kid looks like. This poor kid was shot and the President of the United States only public reaction [was] ‘Mind you, if I had a son he’d look like that’? For what purpose does one say that? And what must you be thinking about this situation to think that and then say it?” the conservative radio host said.

...He added, “Here you have the death of an American citizen that seems a political opportunity. There’s no humanity in that. There’s no compassion in that. It’s just … very sad.”

Limbaugh also hit Obama for “not saying anything when a group of citizens issues a bounty for another citizen,” referring to the $10,000 bounty that the New Black Panther Party has offered for the capture of Zimmerman.

“Where is the president on this?” he said. “I would think that somebody in authority would try to do something to calm this down. I know the president’s in North Korea, but he could still say something about this and when he doesn’t say anything about it, we’re left to question — why?”

And then, just today, the Obama Campaign sent out a Tweet advertising a college style hooded sweatshirt (JWF, via Gateway Pundit). 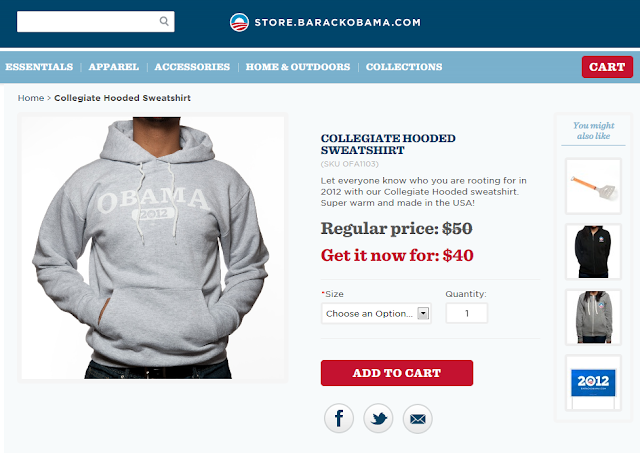 To quote his own words from 2009, Obama is acting stupidly in this case.  There's no other way to put it.
Posted by MaroonedinMarin at 2:40 PM