Leaving On A Jet Plane...To Where Everyone Knows Your Name

So, I'm jetting out tomorrow to the Boston area for my annual business trip, where I'm going to be busy wrangling up business and entertaining clients in restaurants, sports bars, you name it. 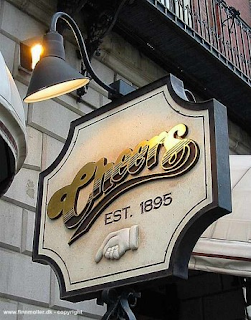 Since I'm going to be busy earning gas money!!!!, I'll probably not be able to post until next Monday.

Until that time, I'll leave you with this:

Tomorrow is the Hands Off My Healthcare Rally in Washington DC, as the Supreme Court is hearing the lawsuit against Obamacare. Information is here, as well as a petition. Rally starts at 1 p.m., with Paul Ryan, Michele Bachmann, Pat Toomey, Rand Paul and Jim Demint as some of the speakers.

More information is coming out about the Trayvon Martin murder case. Orlando Sentinel is reporting Martin attacked Zimmerman, punching him in the nose and slamming his head into the sidewalk. It looks like he'd been suspended for marijuana residue possession, as well as multiple other suspensions.  Daily Caller found what is believed to be Martin's twitter account. There's even racist t-shirts with Zimmerman's picture (P-SSY A$$ CRACKER) hitting the streets in Florida.

Rick Santorum caused a stir by getting into it with a NY Slimes Reporter over a loaded question (suggested by a Romney aide) and using the BS word.  Rick gets thumbs up for that, but thumbs down for trying to act as judge against George Zimmerman, before all the evidence is known.

Obama has another open mike moment, where he lets us known what's in his heart if he wins re-election.

The name of Rush Limbaugh will not be mentioned at UNC-Chapel Hill during sports broadcasts. Look out Soviet Union, here we come!

That's all for now. See you on Monday!
Posted by MaroonedinMarin at 6:18 PM