Jihadist Behind Jewish School Shooting In France Is Dead After Standoff

The French interior minister says the suspect in a three-attack killing spree has died after jumping from his apartment window, arm in hand.

Claude Gueant says the suspect, who claims links to al-Qaida, jumped after police entered the apartment and found him holed up in the bathroom. Police and the suspect exchanged fire before Mohamed Merah died.

For background on this shooting, here's a post from American Power on the hunt for the shooters.

And proof that anti-Semitism is alive and well on the Left, here's a disgusting tweet sent on Tuesday by far-Left rabble rouser Max Blumenthal. 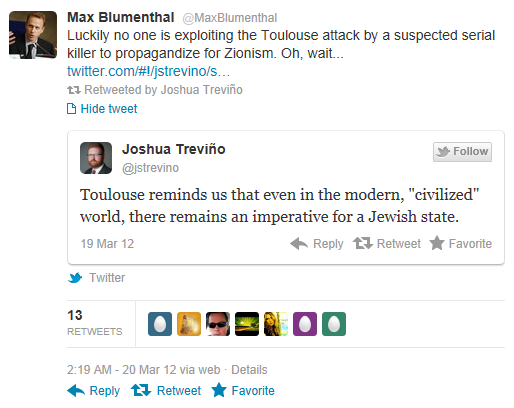 Blumenthal, you dumb ass, you are so blinded by your anti-Semitism you can't see the killer was an al-Queda terrorist.
Posted by MaroonedinMarin at 4:54 AM