Two things come out of this video that Andrew Breitbart promised at CPAC and which was played on Sean Hannity's tv show tonight.

1. Richard Milhous Obama has a history of hanging with and embracing radicals.

2. We see again how corrupt the formerly "mainstream" media (now Obama Lapdog Media) was in 2008, and still is today in covering this President.

From Ben Shapiro at Breitbart.com. 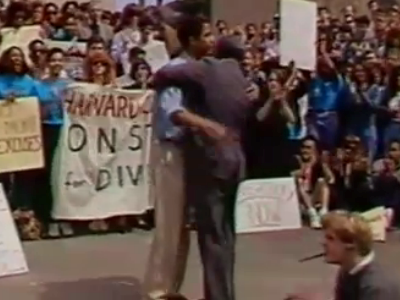 Below is footage of Barack Obama praising and hugging Professor Derrick Bell. It was spliced and diced by the media to avoid showing just how close Obama was to Bell. More than that, a close associate of the Obama campaign, Harvard Law School’s Professor Charles Ogletree, admitted on our exclusive tape, “We hid this throughout the 2008 campaign. I don’t care if they find it now.”

Well, we found it. And it is damaging, because Barack Obama was as close or closer to Derrick Bell than he ever was to Jeremiah Wright. Obama didn’t merely sit in the pews – or not -- for Derrick Bell. He didn’t just hang out with Derrick Bell for prayers. He said:

“Open up your hearts and your minds to the words of Professor Derrick Bell.”

If we did, here’s what we’d be opening our hearts and minds to. This is a close associate of Jeremiah Wright, a man who was quoted by Jeremiah Wright regularly. This is a man who posited that the civil rights movement was too moderate because it accepted the status quo, and believed that the entire legal and constitutional system had to be transformed in radical fashion. This is a man so extreme that, as we’ve reported, he wrote a story in 1993 in which he posited that white Americans would sell black Americans into slavery to aliens to relieve the national debt, and that Jews would go along with it.

There’s far more coming on Derrick Bell. This is just the beginning. And this video is a smoking gun showing that Barack Obama not only associated with radicals, he was their advocate. 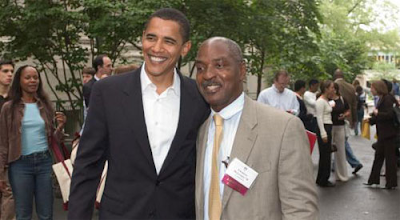 Pat Dollard, via Twitter, reminds us that Obama visited Prof. Ogletree when he was at Martha's Vineyard on this taxpayer funded vacation last summer.

Charles Ogletree was a black panther. He is also the lawyer of Henry Louis Gates, the racist Harvard professor who’s racism caused the beer summit. Ogletree’s daughter Rashida was recently hired into Holder’s Justice Department as a lawyer. Ogletree is still a militant leftist and is still called on by the Obamas for advice.

More about radical professor Derrick Bell from Discover the Networks.
Posted by MaroonedinMarin at 6:59 PM