To dovetail on my previous post, we might as well dig all these up and remind liberals of how silent they were when conservative women, like Michele Bachmann.

Let me remind you of then-Airhead America liberal radio host Montel Williams, who said on air that Congresswoman Bachmann should kill herself.


Guess what? Montel Williams is going to take part in an event for Obama's job council next week in Atlanta (Politico).

President Obama often rails against the high-interest loans industry -- but that didn't stop payday loan pitchman Montel Williams from being tapped to headline an event for the president's jobs council event next Wednesday in Atlanta.

Williams, an ex-TV talk show host, appears in commercials for MoneyMutual, which connects borrowers with a network of payday lenders. Based in Nevada, MoneyMutual is rated “F”—the lowest score possible—by the local Better Business Bureau.

...Williams won’t be telling students at Georgia Tech next Wednesday about how to snag a $1,000 loan overnight. He will be moderating a panel with Intel CEO Paul Otellini and NASA Administrator Charles Bolden to promote engineering education.

Intel spokeswoman Lisa Malloy said the company picked Williams to lead the discussion because of his background as a U.S. Naval Academy-trained engineer.

Williams is “enthusiastic about participating [in an jobs panel] that ensures the future of our country,” said his spokesman Jonathan Franks.

As for the rest, “Mr. Williams welcomes the chance to work with the current administration on establishing common sense industry standards to ensure all lenders are held to the same standard MoneyMutual holds their network of lenders to,” Franks said. “He therefore has no concerns about being associated with the administration in the context of this important event.”

Maher and (Dan) Savage also blasted the Bachmann's for receiving money from the government for the clinic and for their farm, with Savage labeling them "grifters and scumbags."

And if you think that is harsh, just wait until you hear what Maron followed it up with:

"I don't want to be crass but I just hope that Marcus Bachmann takes all that, you know, that rage that comes from repression and denial and brings it into the bedroom with her. I hope he fucks her angrily, because that's how I would and I've thought about it."

Given what conservatives have been saying about him lately, you know Maher didn't need a comment like that on his show.

Savage, most likely trying to diffuse the uproar that is bound to spring up, said that he, as a gay man, had the same feeling about Rick Santorum.

“I sometimes think about fucking the shit out of Rick Santorum."

"I’m up for whipping up some santorum in Santorum.”

Back in June 2010, a vile (c)rapper named G-Biz promoted a vile anti-Bachmann song with a CD release party, in which the following fliers were passed out. 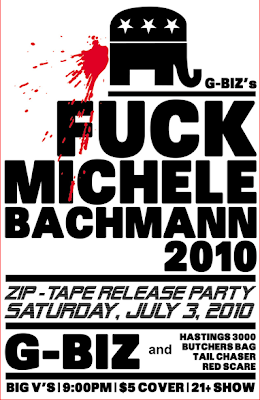 And we didn't hear a word of outrage from the feminazis at NOW, Nancy Pelosi, Debbie "Thunderlips" Wasswerman Schultz, and no phone call from Richard Milhous Obama.
Posted by MaroonedinMarin at 5:38 AM