The crown jewel of the Green Energy mirage, the taxpayer-funded, now bankrupt, Solyndra plant in Fremont, CA, is up for sale.

Melanie Morgan sent this photo of the For Sale sign, taken by Katie Green of the KSFO Morning Show. She says,

"The 'For Sale' Sign seems to be an apt metaphor for the entire Obama administration." 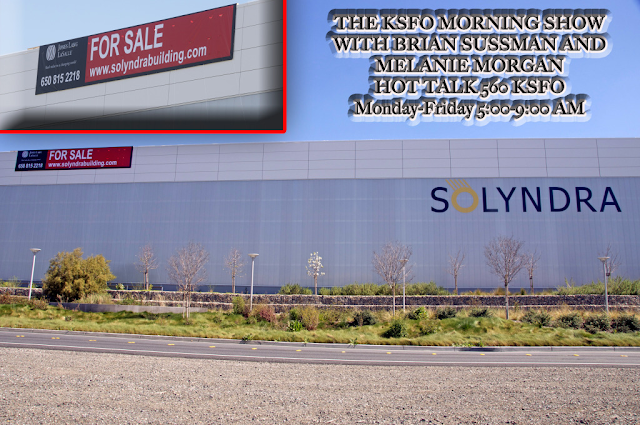 Crony capitalism at its worst.

Looking at the website listed on the sign, I didn't find a sales price, just floor plans, photos, etc. 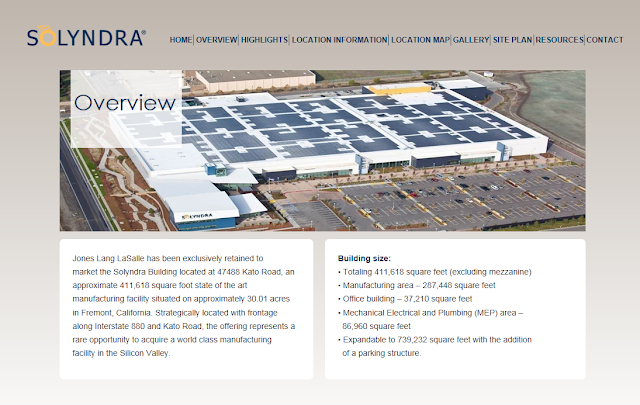 The U.S. bankruptcy court in Delaware on Wednesday approved the appointment of real estate services company Jones Lang LaSalle Inc to market the Fremont, California building, which cost more than $300 million and was completed in 2010, according to court documents.

But another commercial real estate expert said it could go for about $150 million.

Solyndra, which manufactured cylindrical solar panels, rose to fame after President Barack Obama visited it in 2010, as part of the administration's efforts to promote jobs in renewable energy. Solyndra had received a $535 million federal loan guarantee to build a factory in Fremont.

Solyndra's bankruptcy has been politically embarrassing for the administration as Republican lawmakers jumped on it as an example of failed energy policy and government waste leading up to the 2012 presidential election.

Solyndra's facilities could benefit a company that needs an utlra-clean environment such as makers of semiconductors or disc drives.

The building, located on 30 acres in the southeast section of the San Francisco Bay Area, comes with 31,000 square-feet, or two floors of office space.

Shouldn't this money be repaid back to the taxpayers? After all, this was paid from taxpayer funds (taxes).

Remember too, how Richard Milhous Obama, who was once so eager to take credit for Solyndra, is now doing his usual game of "passing the buck" when it comes to failure.

Yes, Solyndra is the perfect metaphor for the Obama Regime, in more ways than one. "For sale" to political allies. "Bankrupt" of ideas, and leading America to economic bankruptcy.
Posted by MaroonedinMarin at 6:12 AM