Democrats In Florida Desecrate Flag, Put Obama's Picture On It

Can you believe this? In Lake County, Florida, on the Democrat Party Headquarters flagpole, flew a flag with Obama's mug replacing the stars, underneath the US Flag (Fox News).

"It's absolutely disrespectful," Jim Bradford, a 71-year-old veteran who participated in the Bay of Pigs Invasion told FoxNews.com. "It's totally ridiculous. To put somebody's picture there, to me, it's a disgrace to do that."

Bradford, an organizer with the Veterans Memorial at Fountain Park in Leesburg, Fla., snapped photos of the flag and distributed them to fellow veterans and friends. By late afternoon, he and several other veterans delivered a copy of the federal flag code to Nancy Hurlbert, chairwoman of the Lake County Democratic Party.

"We read that to her, but she would not accept that," Bradford said. "The discussion finally got a little bit heated."

The flag, which had been flying for several months without complaint and is available online for $12.95, was later removed by Hurlbert.

Bradford said Hurlbert apologized for the incident, but did not offer any promises that it wouldn't fly again.

"What really upsets me is that the flag had apparently been flying for months and no one had done anything about it," Bradford said. "I've got no hard feelings toward [Hurlbert], but people will be driving by there to make sure it doesn't go up again."

What does the dumbass at the Democrat Headquarters have to say?

Hurlbert said Tuesday's incident was the first time anyone had complained about the flag, which she received as a gift two months ago.

"It leads me to believe that it's not about the flag," she told FoxNews.com. "Certain elements cannot accept Barack Obama as president."

Are you that dense, idiot? How about veterans who have risked their lives to protect your ungrateful ass who want citizens to have a respect for our Nation's Flag.

These Obama supporters have a thing for Cult of Personality types.  Remember the flag at Obama Headquarters in Houston in 2008, with mass murdering Communist Che Guevara? 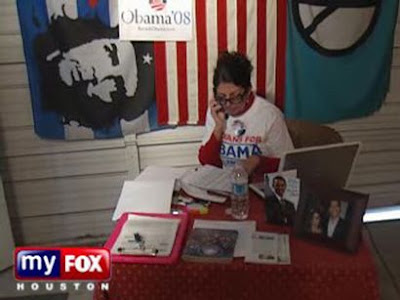 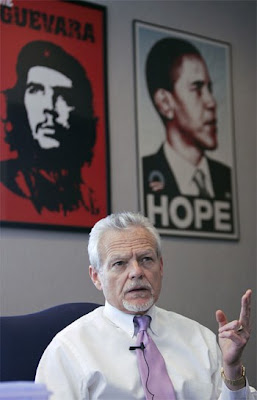 "All this for a damn flag?"

Oh, and one more thing. The Obama flag flown at Democrat headquarters was made in China.
Posted by MaroonedinMarin at 6:55 PM