Democrat Party, DCCC May Be Linked To Illegal Anonymous Robocalls

This story popped up on Twitter on Friday night, being the latest in the war on Rush Limbaugh. As reported by the UK Daily Mail, anonymous robocalls were targeting voters in various Congressional Districts.

A group calling itself 'The Women of the 99 Percent' is making robocalls across the United States in an attempt to link Republican members of the House of Representatives to 'the war on women led by Rush Limbaugh'.

The automated calls are illegal because they do not state who they are from (there is no known group called The Women of the 99 Percent) or provide a callback number, as required under the U.S. Telephone Consumer Protection Act of 1991.

Jim Hoft at Gateway Pundit has found out more...much more!

The robocalls apparently went out to all of the Red to Blue districts. And, the whole campaign was likely linked to the DCCC.
I just received this from a trusted source:

So far I have confirmation of robocalls to:

All are Red to Blue (either with a specific Red to Blue Candidate or ID’d as a Red to Blue District) with the exception of Renacci, who is in a Member v. Member race with Betty Sutton.

There are 12 additional Red to Blue races (either a specific candidate or a Red to Blue district) that involve a Republican incumbent:

And Tom Latham is in a Member v. Member race with Leonard Boswell in Iowa similar to Renacci’s in Ohio.
Trying to get confirmation one way or the other on these additional races.

This picture was taken of one of the robocalls in Illinois. 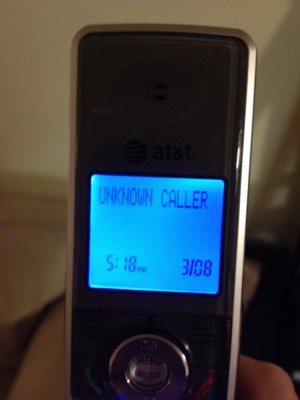 Just so you know – It is also illegal to make robocalls from an anonymous number.

...The “Women of the 99%” organization is not a registered PAC or lobbying group yet spent nearly $28,000 in Illinois and tens of thousands more in several other states. Weird, huh?

—-This story is developing.

"Red to Blue" is a list of Candidates on the Democrat Party's DCCC website.
Posted by MaroonedinMarin at 6:20 AM

Email ThisBlogThis!Share to TwitterShare to FacebookShare to Pinterest
Labels: 2012, Culture of Corruption, Democrats