Two more members of our military in Afghanistan have been killed over Muslim outrage over Korans being used to pass messages among terrorists being destroyed (AFP, via This Ain't Hell).

“There was a shooting inside the command and control centre of the interior ministry and two Americans have been killed,” the source, told AFP, requesting anonymity.

Some reports said the shooting was a result of a “verbal clash”, but details of the incident were not immediately clear.

The shooting came on a fifth day off anti-US protests across Afghanistan over the burning of Korans at an American-run military base.

And where's the Commander in Chief? Too busy fundraising and campaigning to stand up for the military. Oh sure, he'll take credit for their work and try to use it as a campaign slogan, all while he tries to balance the budget on their backs.

DaTechGuy writes about twitter conversations on this topic, including one tweet he sent in response to someone who said a lot of Christians would kill if a Bible was destroyed. 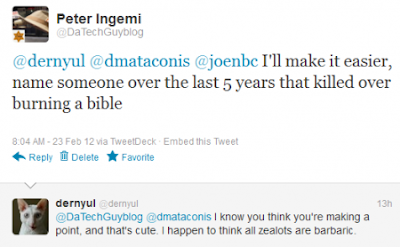 If that's true that a Christian would kill someone over a Bible being destroyed, tell me, how come Mel Brooks didn't have a Fatwah issued against him by the Pope back in 1974?


And look at how there was no apology when Bibles in Afghanistan were burned. How do Muslims treat the Christian holy book? Click here.

Of course, Obama says nothing while Christians in Iran are jailed and their Bibles are burned, but he's all too quick to show weakness to the Muslims by apologizing.
Posted by MaroonedinMarin at 7:16 AM

But we're supposed to believe they never heard of that in the White House.