It looks like the Big Mo ended tonight for Rick Santorum, as Willard Romney easily won (as predicted) Arizona and edged out the former Pennsylvania Senator in Romney's home state of Michigan.

The Tweet of the Night comes from Joshua Trevino: 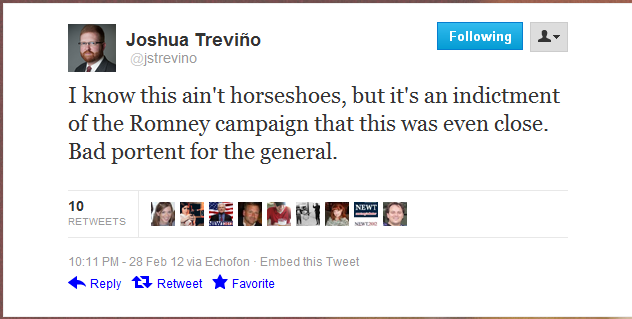 How bad was it? From what I saw, the turnout was down from 2008. Romney's margin of victory was 80,000 votes over John McLame four years ago. Even though the final numbers aren't in, last numbers I saw had him leading over Santorum by 20,000 votes.

The take away message from Mitt's win in Florida a few weeks ago and tonight is that, when he's down, Mittens spends millions of dollars in ads trashing his opponents, instead of telling people why they should vote for him. He doesn't inspire people to vote for him, nor does he inspire trust. I still have concerns that a Romney candidacy means another four years of a President who should otherwise be losing by a landslide in November.

For his part, Santorum hurt himself in the debate last week by going toe to toe with Mittens. Did he also hurt himself with Catholics by saying the JFK speech made him want to throw up?

Super Tuesday is next week, and we should get a better picture then of how this race will shape up, and if anyone will seal the deal.
Posted by MaroonedinMarin at 7:43 PM