Remember how, before the Florida GOP Primary, new media pioneer Matt Drudge became a bullhorn in the GOP establishment's "Destroy Newt Gingrich" campaign, plastering over ten anti-Newt stories in one day on his website, many of which had content that was factually challenged.

Drudge proves again he is in the tank for Willard "Mittens" Romneycare, who is trailing Rick Santorum in Mittens' birth state of Michigan. So, Romney and his SuperPAC have spent millions telling voters why they shouldn't vote for Santorum, instead of why they should vote for Romney.

And Romney got some help from his boy Drudge today, who ran an article about this speech from 2008. 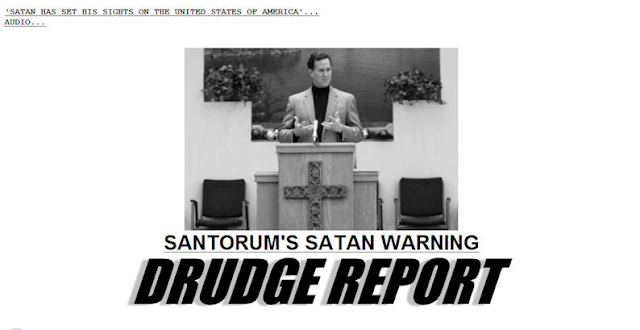 Now, keep in mind, this speech was from 2008, and it was at a Catholic University. It is not in the context of a candidate's stump speech. So, essentially Drudge and by proxy Romney, is attacking Rick Santorum's faith, or also the belief of any practising Christian who believes in the concept of good and evil, in the physical and spiritual sense.

Keep in mind this while Mittens Romney has complained about attacks made on his Mormon religion, even recently. Supporters of his, like the other loser John McLame, even complained about "anti-Mormon bias" in South Carolina against Mittens.

Don't try to tell me Drudge isn't connected to Romney, either. I've written about Drudge's connection to Romney operative Matt Rhoades earlier, which proves what Fred Thompson said about Drudge being in Mitten's back pocket.

The full (Santorum) speech is available here and here is a contemporaneous press release by the university, excerpts below. Santorum has already made it quite clear, he respects the separation of church and state. While any politician must draw on their values in political decision-making, he has also said he does not believe in imposing his religious views on others through acts of government. Ethically, morally and constitutionally, the current faith-based attacks on Santorum are repulsive and completely un-American. The people employing them should be ashamed.

So, will you condemn these attacks on Rick Santorum's faith, Mittens?

Sister Toldjah - Where’s the MSM/left wing outrage over *BO* using Christianity as a basis for beliefs?
Posted by MaroonedinMarin at 6:37 PM