Radical Falls Church, VA Mosque Was A Prayer Stop Before Thwarted Suicide Bombing Of US Capitol

Yesterday, the FBI thwarted an attempted suicide bombing of the US Capitol Building in Washington DC, arresting Amine El Khalifi, an illegal alien from Morocco, in a sting operation.

When first reports of the arrest came out, there was line caught my eye (Fox News, via This Ain't Hell).

The man, in his 30s and of Moroccan descent, was nabbed following a lengthy investigation by the FBI, initiated after he expressed interest in conducting an attack. It’s unclear how the FBI learned of his aspirations.

The man thought undercover FBI agents assisting him in his plot were associates of Al Qaeda.

A short time earlier, he had been praying at a mosque in the Washington area. His destination was Capitol Hill.

My suspicions were right, according to the Washington ComPost.

On Friday, before preparing for what he allegedly considered a “martyrdom” mission, Khalifi prayed at Dar Al-Hijrah, a Northern Virginia mosque, according to its imam, Johari Abdul-Malik, who said he learned of Khalifi’s presence in an afternoon phone call from the FBI. “They said that the guy prayed at the mosque this morning,” Abdul-Malik said. “They said they’ve been following him for a long time now, and he’s not a regular attender at our mosque nor any other mosque.”

What the ComPost didn't remind their readers of is that Dar Al-Hijrah in Falls Church, VA, was the same mosque where two of the 9/11 hijackers--Nawaf al-Hazmi and Hani Hanjour--attended during 2001. At the same time, Maj. Nidal Hassan attended the mosque as they were followers of radical Islamist cleric Anwar Al Awlaki. When the cleric was killed in a US drone attack last year, the mosque sent out a Tweet saying he had been "assassinated," and on their website, the mosque alleged he'd been tortured by Yemeni authorities. 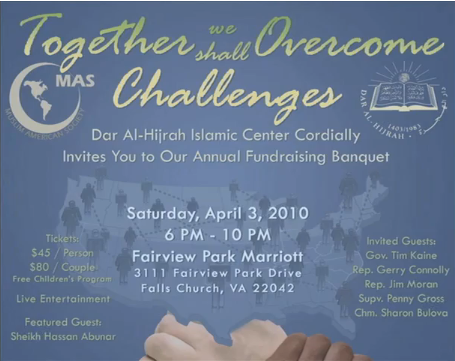 In April 2010 Democrat politicians, including former VA Governor Tim Kaine (who is now running for US Senate), Reps. Jim Moran, and "Jihad" Gerry Connolly were listed on a poster as invited guests of a fundraiser for the mosque. By the date of the fundraiser, Moran and Kaine had cancelled, but it was not known if Connolly attended.

And I'm sure you won't find any of this information on any "mainstream" news coverage.
Posted by MaroonedinMarin at 7:14 AM