Liberal Racism: Daily Kos Attacks Mia Love As "One Of Two African Americans Living In Utah Not Playing For The Jazz"

According to liberals, conservatives are the real racists, right?

Let's see, the lib site Gawker was so eager to engage in that slander they accused some conservatives at CPAC of using the "N-word" in a rap video.

The failed jazz guitarist (if you consider Al Jarreau jazz) / failed blogger Charles "Icarus" Johnson is so desperate for attention he claimed conservatives posted racial slurs on a story about Whitney Houston's death. Never mind that "Icarus" has sent his lieutenant Kilgore Trout to blogs to post racial slurs.

But "Icarus" and Gawker are silent at the liberal racism on display at Marcos "Screw Them" Moulitsas' Daily Kooks website. Via The Jersey-Texan:

I was recently informed about a piece by Daily Kos promoting racism versus Republican candidate Mia B. Love. I've had the pleasure of meeting Mia in person at CPAC and welcome her campaign to bring conservative values to Utah's newly formed 4th Congressional District. Read more about her campaign at Love 4 Utah now.

The Kos piece, written in January 2011, is mentioned in this eye opening piece from 54°40′ Or Fight!

How is it acceptable in our "post-racial" world that Daily Kos promotes and accepts racism? They're so often featured on MSNBC and other mainstream media outlets as respected and prominent in providing insight into the "state of the union." Well, Daily Kos does promote racism by stating Mia B. Love is "one of only two African-Americans living in Utah not currently playing for the Jazz." 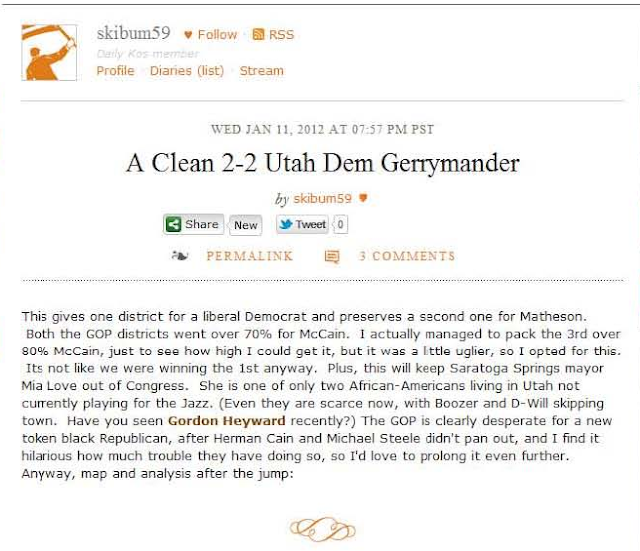 That's not all. The lib writer at the Kooks also said the "GOP is clearly desperate for a new token black Republican since Herman Cain and Michael Steele didn't pan out."
Posted by MaroonedinMarin at 5:28 PM