Simple...there is never any willingness to fight liberals. As soon as the Democrats start to demogauge, the GOP gets spooked (Yahoo News).

While Boehner showed no immediate signs of backing down on his demand that Congress tackle the long-term deal to extend a payroll tax cut before it expires at year's end, calls for compromise in his own party grew. With 2012 elections looming, some Republicans fear they will be blamed for letting the tax bill rise on January 1 for 160 million Americans. (M.I.M. Note: That 160 million number is incorrect, h/t Jim Hoft)

Obama telephoned Boehner and Senate Majority Leader Harry Reid, a Democrat, to stress his willingness to work with Congress to get an agreement on the expiring payroll tax cut, White House spokesman Jay Carney said.

Obama asked Boehner and House Republicans to drop their opposition to a short-term measure that the Senate passed overwhelmingly at the weekend and signaled an unwillingness to reopen negotiations now, as Republicans are demanding.

...While Obama is not reopening talks, his gesture on Wednesday might be seen as a nod to Republican demands. It came just hours after Republican House Majority Leader Eric Cantor called for the president to get directly involved to resolve the dispute.

Meanwhile, House Republicans have been coming under heavy fire from fellow Senate Republicans and conservatives over their refusal to consider the two-month deal eked out by the Senate leadership on Friday night. Senate negotiators had been unable to agree on how to pay for a longer-term extension.

"The smartest thing for (House Republicans) to do would be to pass this (bipartisan Senate bill), live to fight another day and then push for a full-year extension," a senior Senate Republican aide said.

"If and when paychecks get smaller, people are going to ask, 'Why?'" the aide said. "We (Republicans) get the blame, Washington gets the blame and it won't be great for Senate Democrats either," the aide said.

This is the problem with Republicans...messaging. If I were the head of the RNC, I would get out in front of the cameras and show this photo (Gateway Pundit) 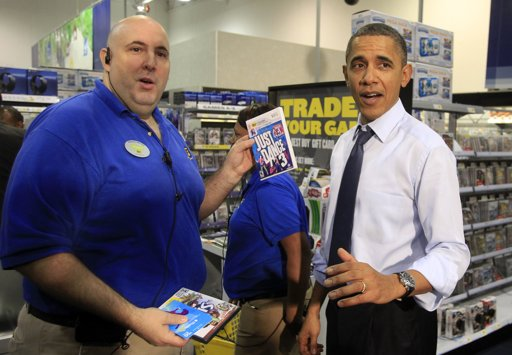 
as an illustration of a President who has time to shop (as well as golf or go on vacation) but never has time to lead on cutting the budget or extending a tax deal. Obama and the Democrats clearly want an issue to bash Republicans with.

Newt Gingrich isn't helping matters either, weighing in and telling the House to accept the two-month deal (WSJ).

“Incumbent presidents have enormous advantages. And I think what Republicans ought to do is what’s right for America. They ought to do it calmly and pleasantly and happily,” Mr. Gingrich said when asked about the clash between President Barack Obama and House Republicans over extension of the payroll tax cut.

Mr. Gingrich made it clear he favored a one-year extension of the two-percentage point payroll tax cut, which expires Jan. 1, not the two-month extension that passed the Senate with bipartisan support. He called the Senate bill “an absurd dereliction of duty.”

He offered sympathy to House Speaker John Boehner for having to negotiate with “a Senate majority leader who is totally disruptive and a president who is basically campaigner-in-chief, who has no interest in solving the problems of the American people.”

But he said resistance was doomed.

In 1995 and 1996, President Clinton successfully used the bully pulpit to paint his budget fight with then-Speaker Gingrich as a battle over Medicare and environmental protection, not a fight over runaway government spending. The two government shut-downs badly hurt the Republican Party and helped Mr. Clinton get off the mat and cruise to re-election.

This was also the beginning of when Newt became neutered as House Speaker. What got Newt in trouble? Flashback from 1995...

The speaker said Wednesday that tough terms in the government spending bill President Clinton vetoed Monday night were included partly as the result of pique he and Senate Majority Leader Bob Dole felt on Air Force One during flights with the president to and from Israel for the funeral.

Gingrich and Dole had complained earlier about their lack of discussions with Clinton during the 25 hours of flying time. But Gingrich went a step further Wednesday by saying the incident contributed to the government shutdown.

That "snub," the Georgia Republican said, was "part of why you ended up with us sending down a tougher continuing resolution" -- the stopgap spending bill that Clinton vetoed Monday. That veto led to the partial shutdown of the federal government, now in its third day.

Then a photo was released of Clinton, Dole and Newt talking on that flight, and Newt was not only checkmated by the White House, but dubbed by the media as a crybaby.

This is the problem with the Republican Party...no leadership, no messaging, and no party discipline, from the Congressional leadership down to the missing-in-action Reince Priebus. So any attempt by the GOP to stand on right principles collaspes like a house of cards when the eunuchs get rubbery in the knees and don't want or care to fight.
Posted by MaroonedinMarin at 7:19 PM