OUTRAGEOUS! US Capitol Christmas Tree Has No Mention Of Jesus...Except The Chicago Jesus (Obama)

The US Capitol Christmas Tree has become so pagan that one cannot find a mention of the "Reason for the Season," that being the birth of Jesus Christ.

But you will find an ornament expressing love for the liberal's false Messiah, Richard Milhous Obama (CNSNews).


The 63-foot Sierra White Fir lighted at the U.S. Capitol Grounds on Dec. 6 as the official 2011 Capitol Christmas Tree includes a prominently displayed ornament paying homage to President Barack Obama, but includes no ornament readily visible to a person standing near the tree's base that uses the word “Christmas,” or includes an image of the Nativity, or bears the name or image of Jesus Christ.

On the north side of the tree--at a height of about 4 feet and easily visible to people standing near it---there is an ornament that says: “I ♥ President Obama.” 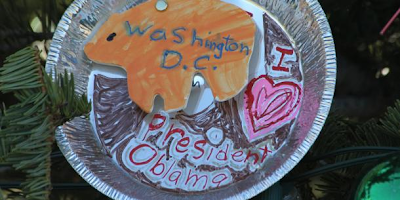 When asked whether the tree included any ornaments that mention or depict Christmas or the birth of Jesus, the office of the Architect of the Capitol, which is responsible for the tree, told CNSNews.com that it “does not have a policy nor any restrictions concerning the themes for the ornaments” that go on the tree. The office could not say, however, whether or not this year’s Christmas tree does in fact include even a single ornament that directly references or depicts Christmas or Christ.

The office of the Architect of the Capitol also did not directly respond to the question of whether any other elected official—in addition to President Obama—is mentioned on any ornament hung on the tree.

“There may be ornaments like those you describe near the top of the tree, or they could have been obscured or moved due to wind or weather,” the architect’s office said in a written statement to CNSNews.com.

Although the Capitol Christmas Tree, as it stood on the morning of Dec. 19, included no readily visible ornament that mentioned or depicted Christmas or Jesus, it did include one ornament that pointed to the Bible and Psalm 19. This ornament, made from an aluminum pie tin, shows a miner panning for gold with a Bible behind him. There is a gold cross on the cover of the Bible. Around the interior wall of the pie tin, these words are written with what appears to be a blue marker: “More precious than Gold” and “Psalm 19.”

Psalm 19 says in part: “The decrees of the Lord are firm, and all of them are righteous. They are more precious than gold.”

The tree also includes an ornament that from a distance looks like it could be a cross--but closer up turns out to be a road sign, pointing the direction not to California—but 4837 miles to Hawaii.

The tree also includes a number of ornaments representing Christmas gift packages. The ribbons on these packages are arranged in a cross pattern--but all of them have "Happy Holidays" ensribed on them.

"Happy Holidays" yeah, I'm sure because the Capitol Office doesn't want to off-eeeeeend anyone.

As a contrast, Jim Hoft, who runs the Gateway Pundit blog just returned from a week long vacation and saw much more public displays saying "Merry Christmas"....in Communist China, of all places!
Posted by MaroonedinMarin at 7:22 PM