Police yesterday got rid of the Occupy squatters in Philadelphia and Los Angeles.

This is Dillworth Plaza in Philly yesterday afternoon, courtesy of Tania at Midnight Blue. 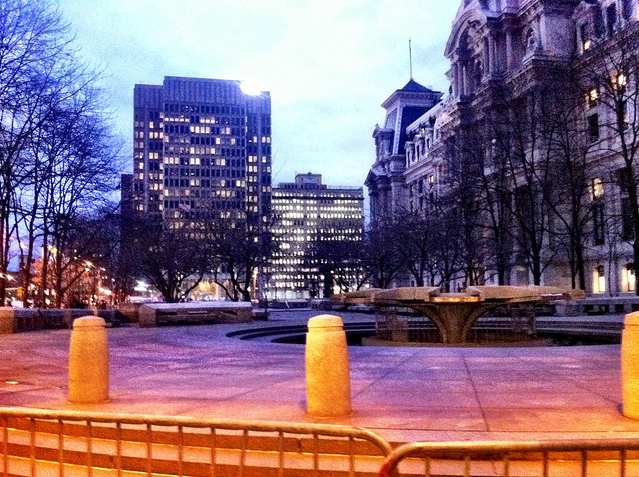 Dilworth Plaza around 5 pm on 11/30/2011. Post Occupation Clean Up – Dilworth Plaza never looked so good. Looking forward to the dynamic redesign of this plaza which will include lots of green space along with a stunning modern redesign.

Many thanks to the skill and professionalism of the Philadelphia Police Department. You achieved the best possible outcome of this public nuisance problem otherwise known as Occupation Philly.

The ABC affiliate there ran an online poll that shows over 77 percent have an unfavorable view of the Occupy movement.

Could it be because they're filthy?

In Los Angeles, 30 tons of debris were left by the squatters there (LA Times, via American Power).

Sanitation officials said Wednesday that they expect to haul away 30 tons of debris from the Occupy L.A. encampment –- everything from clothing to heaps of garbage to oddball curiosities left behind by the protesters who lived at the City Hall tent city for two months.

Andrea Alarcon, president of the city Public Works board, said workers already have removed 25 tons of belongings from the City Hall park, all of it heading straight to a landfill.

Sanitation crews also have vacuumed up about 3,000 gallons of water that had washed into a catch basin in recent days and are testing it for hazardous materials, she said.

The sheer volume of personal belongings left behind after the early morning Los Angeles Police Department raid has astonished city workers: books and CDs, luggage and boom boxes, mattresses and dining chairs, cellphones, electric razors, a small red guitar with its neck snapped –- all surrounded by dozens of collapsed and empty tents.

A steady flow of people stopped by the park Wednesday to take photos and video and watch workers in white hazmat suits rake trash into neat piles.

Part of that debris being taken away...human waste, some of which was being stored, possibly to use as weapons against the police.
Posted by MaroonedinMarin at 5:17 AM