"Beware of the false prophets, who come to you in sheep's clothing, but inwardly are ravenous wolves." Matthew 7:15

And by their fruits, we will know them, and call them out.

Glenn Beck, who built up an audience among the Tea Party, is now turning on that audience for daring to support Newt Gingrich...and playing the race card against the Tea Party. But now he has gone further, and decided he'd support Al-Queda's favorite candidate, Ron Paul, if he ran third party, instead of Newt Gingrich.

As Nice Deb says, Beck has clearly jumped the shark.

He’d throw Israel under the bus over Gingrich?

Unbelievable. I understand that politics gets a little heated at times, and we have our little disagreements over candidates – but this? This is crazy and suicidal. Beck has a large audience, and I hope to heck most of them leave him over this.

Andrew Breitbart really blasted Beck, calling him a "coward" and a "snake," when he appeared on Stephen Bannon's The Victory Sessions (Audio MP3 Clip). Breitbart is right on the money about Beck. His radio style wasn't my cup of tea, but it seems the great events he pulled together, like the Restoring Honor rally, and exposing people like Van Jones on his Fox TV show, turned Beck into an egomaniac who forgot to put "principles before personalities." Also to note...Beck and his companion sites have used bloggers' work without attribution many times, whereas Breitbart and his staff are very generous in linking and crediting bloggers for their work.

There's another giant ego named Michael Weiner, aka "The Savage Weiner" from my old stomping grounds in Marin County who went from skinny dipping with Lefty pervert poet Allen Ginsberg to his schtick as a "conservative" host in the liberal Bay Area. He doesn't want Newt to run so bad he's offering him a million dollars and claims Flip Romney is more electable than Newt (The Hill, via Weasel Zippers). 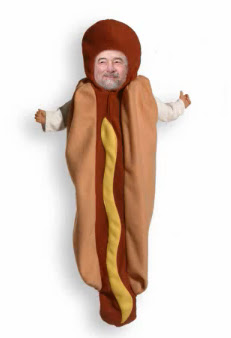 “Newt Gingrich is unelectable. Mitt Romney is the only candidate with a chance of defeating Barack Obama, and there is nothing more important than that for the future health, safety, and security of the United States of America,” the statement read. “Therefore I am offering Newt Gingrich one million dollars to drop out of the presidential race for the sake of the nation.”

Savage conceded that Romney is “not as strong a conservative as many would like him to be,” but listed the reasons why he thinks Gingrich is a threat to Republicans.

Savage said that as Speaker of the House, Gingrich didn’t deliver on his “Contract with America.” He also cited the ad Gingrich made with Rep. Nancy Pelosi (D-Calif.) about global warming, which Gingrich has called the "dumbest" move of his career, and said Gingrich’s idea to offer illegal aliens who are established in the U.S. a path to citizenship amounted to “amnesty.”

Gingrich didn't deliver on the Contract with America? Well, what do you call the 1996 Welfare Reform Act, the balanced budget of the late 1990s, among others, Mr. Savage Weiner? And you think a slick talker whose socialized medicine scheme that was the basis for Obamacare is more electable than Newt?

Up until about 2003-2004, Savage-Weiner was actually a pretty good and entertaining host, but I heard stories over the years about how much of a jerk he was no one wanted to work around him. Most of the time, all he wanted to talk about was his boat, his dog and drinking alcohol "to deal with the vicissitudes of existence." A lot of people I knew who were big fans of his don't even listen to the guy anymore.  He's spent the last few years in a downward spiral, bashing other conservative hosts who are more successful (and who are real conservatives).  It didn't help matters either when he was found giving donations to liberal Jerry Brown as attorney general. His son also donated money to far-Left loon Gavin Newsom.

Like Beck, Savage Weiner is a showman who is just out for a buck, promoting themselves over the cause of conservatism. If you don't like Newt, why not support another conservative, like Rick Perry, Michele Bachmann or Rick Santorum? Don't throw support to an anti-Semitic nut or a RINO with no core values who has flip-flopped more times than John Kerry.