If you're anywhere near my birth city of Austin, TX, head down to the LBJ Library Grounds on Red River St. on the UT Austin campus at 4 p.m. for a protest of corrupt and racist Eric Holder's visit to the Texas Capital city. 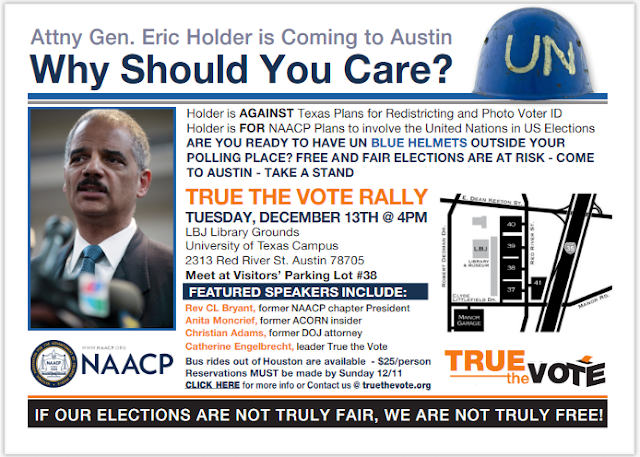 J. Christian Adams will be there. He writes the following at BigGovernment.

On Tuesday, Americans will have a rare chance to voice their disdain of the corruption and lies flowing from this Justice Department. They will have a chance to speak out against the radical and racialist law enforcement priorities of this Justice Department. Eric Holder comes to Austin, Texas to make a major announcement about voting laws, probably to acquiesce to some loud demand of the NAACP to block state efforts to ensure voter integrity. But a counter-rally organized by Catherine Engelbrecht and True the Vote will greet Eric Holder’s appearance in Austin, Texas at the LBJ Library at 4 p.m. America is invited, and here is a flier with details.

You have a First Amendment right to petition your government for redress of grievances. Use it. So rarely has so much been worth grieving.

As bad as Watergate was, it didn’t involve hundreds of murders, dead American law enforcement agents, and the illegal distribution of thousands of firearms. How long has it been since an Attorney General appeared before Congress and words such as “contempt” and “impeachment” were used by members as they were last week?

The Fast and Furious scandal isn’t the only mess overseen by Eric Holder. His entire tenure has been characterized by racialist radicalism, disguised to some critics as mere incompetence. But it is far worse than incompetence, and to think otherwise is a mistake. From the dismissal of the voter intimidation case against racist anti-Semitic New Black Panther thugs, to the Mirandizing of battlefield captures in Afghanistan, Holder has presided over a systemic radicalization of the most powerful federal agency. This isn’t incompetence. It is radicalism.

Many in Washington remain unconvinced of the extent of the destructive radicalism permeating this administration, and particularly the DOJ. In the speeches I give around the country, I lament that I wish Bill Clinton was still President. These are not your grandfather’s democrats. These are not just liberals. From bringing cases to force schools to allow child transvestites, to forcing schools to give Muslim teachers almost four weeks paid vacation for an Islamic pilgrimage, radicalism prevails.

Ponder the racialist rot that Eric Holder carries in his wallet. I write in my book “Injustice“ about a clipping he has carried since 1971.

Blackness is another issue entirely apart from class in America. No matter how affluent, educated and mobile [a black person] becomes, his race defines him more particularly than anything else. Black people have a common cause that requires attending to, and this cause does not allow for the rigid class separation that is the luxury of American whites. There is a sense in which every black man is as far from liberation as the weakest one if his weakness is attributable to racial injustice.

When you witness Holder’s contempt for the rule of law, his disdain for enforcing civil rights and voting laws equally regardless of the race of the victim, and his disdain toward members of Congress, this quote explains a great deal.

This Tuesday at 4 p.m., in Austin, Texas, at the LBJ library, Americans tired of this sort of contempt, this racialist lawlessness, have a chance to let the Attorney General know they expect something better from high office. See you in Austin.

Posted by MaroonedinMarin at 4:21 AM

Email ThisBlogThis!Share to TwitterShare to FacebookShare to Pinterest
Labels: Culture of Corruption, holder