Another death has occurred at the Occupy squatter camps that have sprung up in many parts of the country.

This one in Denton, TX, just north of Dallas, on the campus of the University of North Texas (formerly known as North Texas State University) (WFAA.com).

A UNT spokesperson said the body was discovered unattended in a tent at the Occupy Denton encampment on campus early Saturday evening. 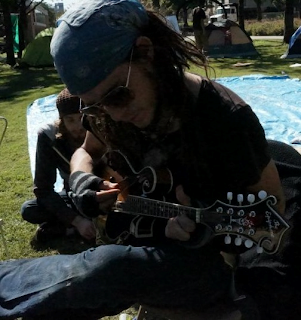 Officials identified the the dead man as Darwin Cox, 23, of Denton.

"He was found in a tent on the Occupy Denton camp where he had been given shelter after a fellow occupier saw him suffering from a fever," according to an unsigned statement posted on the Occupy Denton Facebook page early Sunday morning. "Darwin's lifelong struggle with drug addiction is suspected to have played a role in this tragedy."

Occupy Denton said one of the organization's core issues is homelessness. "The lack of a safety net and inclusive shelters for the homeless left Darwin with nowhere else to go," the unsigned statement continued.

Police said it could be two to three weeks before a cause of death can be determined, but there was no initial evidence of foul play.

The statement on the Occupy Denton page said:

While drug use or possession is strictly against Occupy Denton’s policy, it was the Occupy Denton camp where he found friendship, respect, and compassion for his warm, caring, and generous character. Occupy Denton will dearly miss him, and forever appreciate the fortune of having shared a space and time with our friend, Darwin Cox. We give our deepest condolences to his family.

One of Occupy Denton’s core issues is the struggle against homelessness. Specifically, the lack of a safety net and inclusive shelters for the homeless left Darwin with nowhere else to go. Tragedies like this happen every day and fail to make the nightly news or the newspapers. Our current social structure criminalizes the homeless as well as those suffering from addiction. This is one of the reasons why Occupy Denton emerged, why Darwin joined, and why Occupy Denton will continue the struggle for the marginalized and oppressed.

Before the death, some at UNT sought to remove the squatters, because of the trash and fowl smells (rotting apples, clam chower that expired in July) coming from the camp, similar to what has been reported at other Occupy camps (NBC-DFW).

View more videos at: http://nbcdfw.com.
One student who is sympathetic to OccupyUNT students commented at the UNTDaily, claiming non-students are living in the squatter camp and "are just doing nothing but drinking and doing illegal drugs."

Posted by MaroonedinMarin at 7:16 AM