A Texas Thanksgiving Tradition Comes To An End Tonight

What is as traditional as turkey, stuffing and pumpkin pie in Texas?

The annual football rivalry between the University of Texas (at Austin) Longhorns and Texas A&M University Aggies.

Nueces County Judge Loyd Neal, Texas A&M Class of 1959, has attended nearly every game his alma mater has played against its bitter rival Texas since he was 10.

There was that time though as a young man when he missed it, but he had a good reason. He enlisted in the Army.

The game always has meant a lot to Neal, who will be at Kyle Field on Thursday night. But a rivalry that has spanned 118 years and a holiday tradition for millions of Texans is done, at least for the foreseeable future. Texas A&M is leaving the Big 12 for the SEC next year, and the game will be the last between the two teams until at least 2019.

"It's a shame to see the rivalry end like this," he said. "Hopefully, the two athletics departments can figure out a way to keep this one alive."

These photos below were taken by my sister, who was at the Yell Practice last night at Kyle Field in College Station, TX with my brother-in-law and future Aggie nephew. 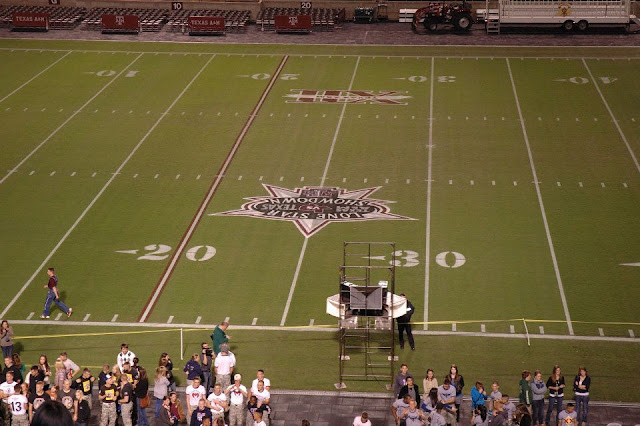 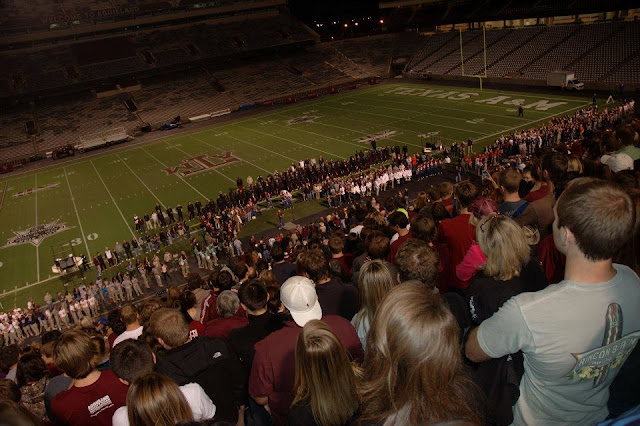 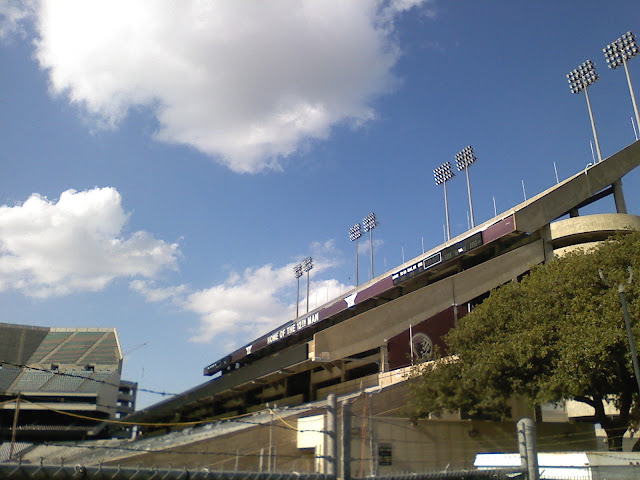 It's a toss up with me between the teams. Having spent my first five years from birth in Austin, there's a lot of Longhorn in me (my dad will tell the story of how he paraded me as a 1 year old in 1970 dressed in orange and white among weeping Oklahoma Sooners fans at the old Mueller Airport in Austin), but I also graduated from a college that is part of the Texas A&M system, so I have some "Maroon" in me as well (hence the maroon color of the blog).

So to prep you Longhorn and Aggie fans....here's the team music...

Posted by MaroonedinMarin at 8:47 AM

Email ThisBlogThis!Share to TwitterShare to FacebookShare to Pinterest
Labels: texas

It's a great tradition that I have been fortunate enough to experience, even though as an outsider (Deekawife 2.0 was an Aggie). My ex-brother-in-law (also an Aggie) introduced me to Texas/Texas A&M in the mid-80's. My ex-wife introuduced me to what happens when the Aggies score.

The Fightin' Texas Aggie Band is a joy to watch and seeing the other side of the stadium sway during the Fight Song is another thing altogether. You don't get that anywhere else.

This is truly "so long to the Orange and the White".

It's a great tradition, so sorry to see it end. It seems almost UnTexan to have Thanksgiving without UT & A&M football.

It's a loss of a tradition, and I have torn feelings about the outcome of the final game.

I despise University of Texas and everything about it, but at the same time, I'm not real keen on the Aggies taking their toys and crying their river of tears over to the SEC.

They're gonna get their clocks cleaned at the SEC.

I miss the old SWC, but once again, the greed of college regents and chancellors takes over and the kids playing the sports become nothing more than pawns.

Odd for me to rant like this because I'm a hardcore capitalist and so conservative that I make Ronald Reagan look like an FDR New Dealer.

But, I'm also a realist and I'm for the small businessman far more than I am for the corporate giant.

The exit of Texas A&M from Texas college football is yet one more sign of the times.

And they're not good times.

I can't help but agree with everyone--AOA, I'm scared to see HOW bad we will be in the SEC, but I guess its time to move one. Deekaman, A&M is a school built on tradition (hence the tradition of kissing when Ole Canon fires for a score), so this tradition of playing on Thanksgiving and BTHO tu (sadly not this yr ha), is hard to see go, but you'd be amazed at all the traditions that are being thrown away with here.
SEC ya tu! BTHO SEC!