I was out of town yesterday and missed the foreign policy debate last night.

Rick Perry made no gaffes, and actually made a few good points, especially on foreign aid to questionable nations like Pakistan (or as Obama says....Pock-E-stan).

Newt Gingrich showed once again just why he's moving up in the polls. He's willing to tell these lapdog media moderators he's not willing to play their "gotcha" games.

I think this is a strategy that's resonating with Americans. Plus, Newt has always been a man of ideas, as well as a lot of experience. He shows it every time he speaks.

Michele Bachmann and her campaign has made an interesting accusation, accusing See BS of bias (I'm not surprised) in limiting her time (The Hill). A screenshot of the e-mail below. 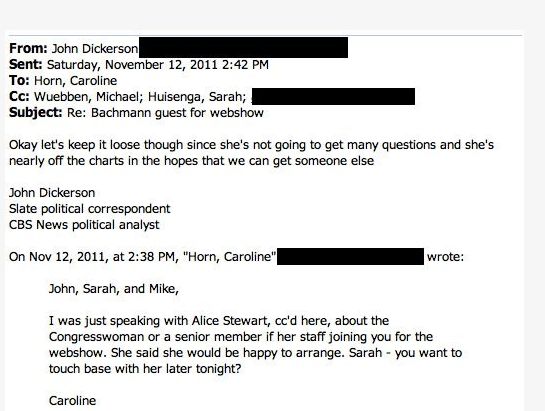 I've wondered about this myself. In some of the debates, I've wondered if the media really tend to give more time to Flip Romney, and give him softball questions and responses.
Posted by MaroonedinMarin at 10:25 AM