Occupy Wall Street Marchers In NY Yesterday: "9/11 Was An Inside Job"

Pundit Press has the video:

If you needed any more evidence that Occupy Wall Street was a bunch of scumbags, here it is. Yesterday, OWS held a "September 11th Truth March," dedicated to forcing the government to investigate the terrorist attacks of 9/11.

I will not dignify these conspiracy theorists with a long response. Thousands of witnesses, thousands of experts, and hundreds of scientific articles all speak for themselves. The fact of the matter is that this impossibly stupid march once again shows OWS to be a group of delusional weirdos.

You can watch the video below and both see and listen a fair-sized group of OWS nuts screaming, "9/11 was an inside job!"

This banner was held by some of the squatters as well: 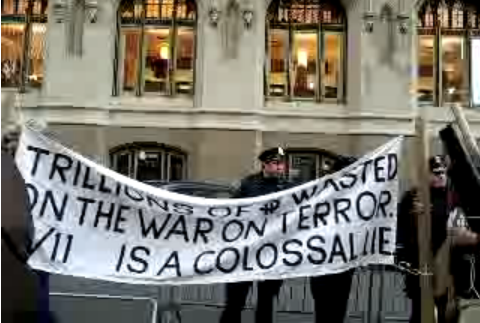 "They're just like the Tea Party." Right!
Posted by MaroonedinMarin at 9:27 AM

I remember seeing you yesterday. I was in that march calling for a reinvestigation into the events of September 11, 2001. I am a student, I own my own business, I am a community organizer and activist and I spend my free time doing volunteer work and protesting injustice. You call me a scumbag. You should spend your time doing something more vauluable than slandering people you don't know in some poorly written, self serving blog.