Protesting greed my ass! Do you need more proof that the Occupy movement is the Obama 2012 footsoldiers, doing the ground work for their community organizer President?

First, they interrupted Michele Bachmann's speech aboard the USS Yorktown museum, which was supposed to be a Veteran's Day event.

This afternoon, in Denver, the Occupy squatters are planning to goosestep over to the Crown Plaza Hotel, where our friends at FreedomWorks are holding this year's BlogCon (United Liberty.org).

I’m in Denver this weekend for BlogCon, a gathering of conservative and libertarian bloggers hosted by our friends at FreedomWorks.Over the next couple of days, we’ll be hearing from different bloggers and speakers, including Hot Air’s Ed Morrissey and economist Jim Pethokoukis.

We got word this morning that Occupy Denver, the group that elected a dog as its leader, will be protesting us at Crowne Plaza Hotel this afternoon/evening at 5pm. They’re calling it a “suprise march.” Yeah, that’s not much of a suprise now, but thanks for the attention.

At any rate, it should be fun. I’ll be posting some updates during the conference. 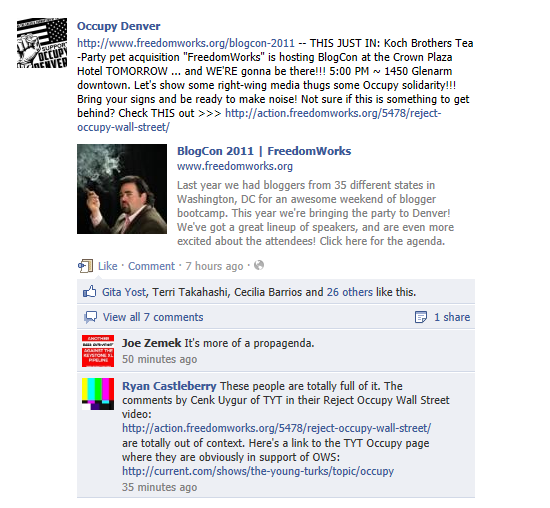 Will be watching this for more.


RELATED: American Power: MacIver Institute: 'Origins and Philosophy Behind Occupy Movement'
Posted by MaroonedinMarin at 7:04 AM