Lib Racist Bill Maher: Romney Needs To "Stop The Rise of the Apes"

This was after Maher was talking about Herman Cain with "Curious George" Steponallofus (Newsbusters, h/t Gateway Pundit).

MAHER: But, that’s just because they hate Mitt Romney.

MAHER: You have got to feel bad for Mitt Romney. I mean, he’s been led, so far, by Trump, then Bachmann. Then Perry. Then Cain.

STEPHANOPOULOS: But, he kinda hangs in there. He’s everyone’s second choice.

MAHER: I’m rooting for him. You know? Because, look, in a country with only two parties, the Republican can always win. I mean, at least he eats with a knife and fork. I mean, he is all that stands between us and the rise of the apes.

Maher must have left his new wardrobe at home..... 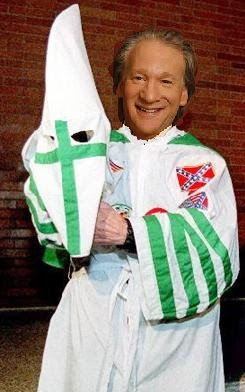 Posted by MaroonedinMarin at 4:31 AM

Are you kidding? Bill Maher a racist? First off are you familiar with the women that Bill Maher dates? He has been romantically involved with Black Women since forever.

And BM was not referring to race or ethnicity when he used the term "Rise of the Apes"....he was commenting on their lack of logic and leadership.

Its really interesting how you take things out of context and use them to benefit your blog and point view. Is Fox News hiring...you'd be a perfect fit.

Who's absolutely embarrassed by his party.