From US News, via JWF. 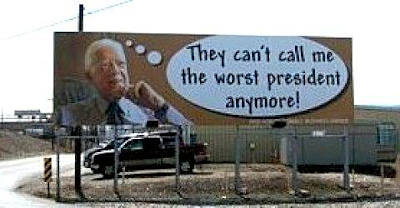 Back in 1979, Carter was far below Obama until the Iran hostage crisis, eerily being duplicated in Tehran today with Iranian protesters storming the British embassy. The early days of the crisis helped Carter’s ratings, though his failure to win the release of captured Americans, coupled with a bad economy, led to his defeat by Ronald Reagan in 1980.

The only things on Obama's side right now is he doesn't have a primary contender (the lifeguard of Chappaquiddick, Ted Kennedy challenged Carter in 1980), and there is no Reagan-esque GOP candidate to challenge Obama in the fall.

Other than that, I'd agree (rarely) with Karl Rove and say Obama is worse than even James Buchanan (exceedingly worse than Carter), which would make Obama the worst President in American history.
Posted by MaroonedinMarin at 6:34 PM